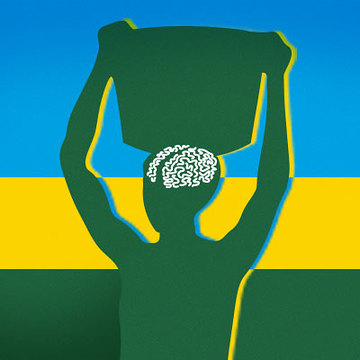 Is Mental Health a Priority in Missions?

The needs of developing countries bombard the average American on an almost daily basis. A village in Malawi needs clean water. Orphans in Albania need food. People along the Amazon need medical attention. But in the middle of trending projects and buzzworthy activism, it’s easy to overlook or neglect issues below the surface, such as mental health.

“There are those needs that need to be met, such as medical care and food, but that doesn’t always reach the deeper needs that people have,” said Eric Flaa, a WorldVenture missionary serving in Rwanda. “If you have somebody who has been traumatized, or severely depressed, you can do humanitarian work, but they’re still broken.”

Eric teaches church leaders how to counsel people within their own congregation. Unlike the U.S., Rwanda lacks significant mental health care resources like suicide prevention hotlines and mental health hospitals.[quote_right]“Here in Rwanda, I think there is a stigma of mental illness, in one part because there is a segment in church that would say mental illness is an aspect of spiritual warfare or demonic possession. Others see it as a failure or weakness, which, again, in a culture where trust is difficult to come by, a weakness is not something you would like to show.”[/quote_right]

Rwanda has a rate of only 0.01 mental health hospitals per 100,000 people, according to the World Health Organization. And while there are no official statistics on the suicide rate in Rwanda, the WHO estimates neuropsychiatric disorders contribute to 4.8 percent of the “global burden of disease.”

When Eric first moved to Rwanda in late 2004 to teach English, he fell in love with the country and his team, but realized he disliked teaching. So he began praying about what to do next.

That’s when Eric, who had already received his undergraduate degree in psychology from Northwestern College in Minnesota, began to feel God calling him to use his passion for counseling and mental health care in a cross-cultural context.

He then moved back to the United States, and over the next 10 years, he obtained his master’s degree and worked in Colorado as a counselor. But his dream of returning to Rwanda never left him. And after much prayer and hard work, he finally returned, this time deploying his skill set and passions for long-term work.

“The services that I can provide allow us to reach people in a different way. Still, the goal is to see them be transformed by the power of the Holy Spirit, by the power of Christ, to be as God has made them to be,” he said.

While most people were encouraging and supportive of Eric’s decision to counsel Rwandans as a gospel ministry, others did not understand. Some within the evangelical church hold that mental health issues are always spiritual issues. Eric believes that while there can be a link between the two, they aren’t necessarily interchangeable.

“Professionals are needed who have wrestled with and succeeded in integrating faith and psychology,” shared one of WorldVenture’s International Ministry Directors. “There is a great deal of work to be done in our region, but our ministry must be balanced between knowing theories and diagnosis and knowing the Source of all healing.”

Part of WorldVenture’s approach to transforming communities through the gospel involves the holistic care of people—emotionally, spiritually, and physically. Caring for nationals involves breaking down the stigma of mental health disorders within churches, while also discerning the effects of mental disorders, not just assuming spiritual shortfalls.

[quote_left] “We are to be the body of Christ, and we are to serve ‘the least of these,’ to serve those who are oppressed, to serve those that fall between the cracks. And in many situations the person who is mentally ill falls between the cracks for a number of reasons.”
[/quote_left]“There is a great need for trained mental health care professionals on the field, but understanding language and culture is absolutely critical,” according to a worker who has counseled Spanish nationals for more than 15 years.

Because of the Rwandan genocide in 1994—when almost 1 million people were killed in the span of a few months—Eric said many Rwandans are open and receptive to the idea of mental health care as a need. But there is still a cultural lack of trust: going to a counselor can be seen as a sign of weakness.

“Here in Rwanda, I think there is a stigma of mental illness, in one part because there is a segment in church that would say mental illness is an aspect of spiritual warfare or demonic possession,” Eric said. “Others see it as a failure or weakness, which, again, in a culture where trust is difficult to come by, a weakness is not something you would like to show.”

Local church leaders know they can come to Eric for help when they are faced with a particularly difficult case. One church leader came to him recently to learn how to help a woman in the congregation who was suicidal. Through Eric’s mentorship, the pastor and his wife were able to talk with the woman and help her with some of the underlying issues feeding her depression. Though she still struggles, the woman is now improving and is in a position to earn an income.

“If we say that we are the people of God, how do we then reach out in compassion to those who suffer?” Eric asked. “And how we do look at people with mental illnesses—whether it’s trauma, depression, or another condition—and help them experience the healing power of the gospel?”

Mental health care is a very important need within the church, not just locally in the United States or Rwanda, but globally, he said.

Eric’s dream is to see more Rwandan nationals in mental health care professions, a network to connect mentally ill with professionals, and for more people in various professions to use their abilities for the kingdom.

“Missions is not just for the pastor or church planter, missions is the task of the church,” he said. “I would love to see more people that are Christians saying ‘Okay, how do I fit?’”