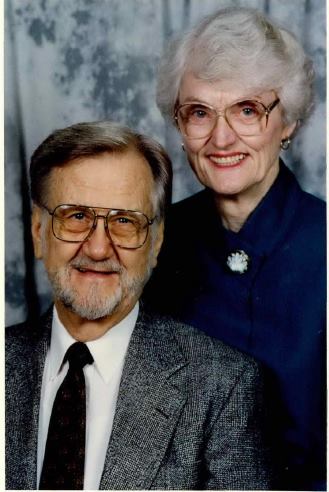 (Denver, CO) – WorldVenture announces the bittersweet news that Arno Enns, veteran missionary to Argentina and influential leader for WorldVenture, died at noon on Tuesday, February 20, 2018, at the age of 93.

During his and Cora Lee’s time in Argentina, he started and led several churches. Arno Enns also held evangelistic campaigns and discipleship programs that included individual Bible studies with church leaders, helping them grow in their knowledge and faith in the Lord, even as they led others. His extraordinary cross-cultural intelligence, tremendous linguistic skills, and deep love of the Lord enabled him to make life-changing connections with his fellow Argentines. He truly loved the people with whom he worked and labored to see them grow in their faith in Christ.

Arno and his wife, Cora Lee, were appointed by CBFMS (now WorldVenture) in 1952 to serve in Argentina, South America. Serving their first term in Salta and Jujuy, they led three established churches as well as planting three new churches in Palpala, San Salvador de Jujuy, and Joaquin V. Gonzales. He also helped start the Mobile Bible Institute. By 1963, the family moved to Tucuman, where Enns continued meeting with people, mentoring students at the university, holding Bible studies, and starting new churches. In 1964, Enns was involved in developing a city-wide evangelistic outreach entitled “Evangelism-In-Depth,” which helped inspire and excite the Christian churches of the area. The outreach culminated in an interdenominational evangelical campaign attended by thousands.

Then, after 15 years in Argentina, Enns was asked to fill a leadership role at the WorldVenture’s headquarters in the USA. After considerable prayer, Arno and Cora Lee moved their family to Wheaton, IL where he spent the next 22 years directing the mission’s work in South America and Europe. After retiring in 1993, Enns launched WorldVenture’s Missionary Development Department (now “The Paraclete Center”), one of the mission community’s early efforts to help missionaries thrive in the midst of the personal challenges brought on by cross-culture life and work. Enns later created CB Partners, a ministry based in the home office that gave the opportunity for local Christians to help missionaries in a variety of practical ways.

Former WorldVenture Vice-President, Dave Wedin, called Arno Enns tenure “legendary.” Wedin noted that “Arno was a great mentor, leadership developer and encourager… his philosophy was to ‘let them fly’ and ‘we’ll get a lot done if we don’t care who gets the credit!’”

Arno Enns was instrumental in helping WorldVenture do missions work with greater skill and organization. He mentored young workers and became a sounding board for many who sought his wise counsel. He helped raise up a new generation of leaders within WorldVenture and for the wider evangelical community. Arno Enns “finished the race” (2 Timothy 4:7) and taught others to do the same.

“Because of his love for the Lord, Arno contributed his life to the growth of Christ’s Church around the world,” said Jeff Denlinger, President of WorldVenture. “He will be remembered for his compassion for people, his wisdom in helping others grow in the Lord, and the guidance given to the many people who crossed his path.”

A memorial service will be held in Wheat Ridge, CO. at 2:00 PM on Saturday, March 3, 2018 at Trinity Baptist Church (4490 Newland St, Wheat Ridge, CO 80033), followed by light refreshments and time of fellowship. In lieu of flowers, a memorial fund has been established to support the very work to which he devoted his life. All gifts will be given to WorldVenture’s “Engage the World” 75th Anniversary Fund, helping new missionaries get to the field and create new work among unreached peoples around the world. Arno and Cora Lee Enns were a significant part of 66 of WorldVenture’s 75 years, serving as prime examples of what it means to engage the world for gospel impact.