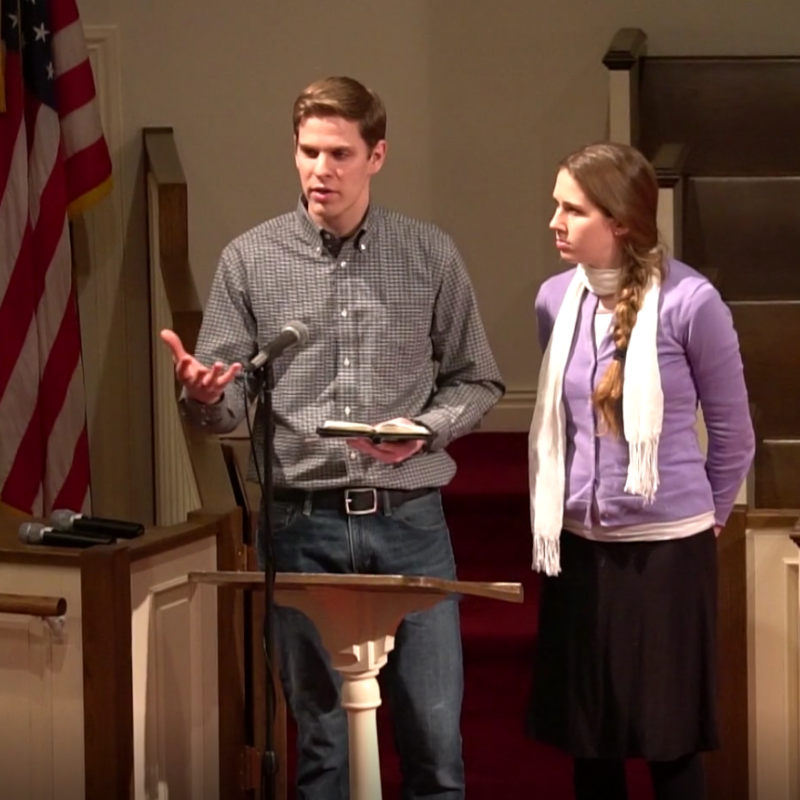 3 Ways to Keep Your Missionary Secure

(Photo at a church of David and Kristen Caucutt )

A Brief Guide for Partner Churches and Individuals

One day we had a visiting missionary come to our headquarters to share what God was doing in his field. He was from a closed country where the Gospel was not welcomed. He showed us a picture of a gathering of believers. Because of security concerns, he had all the people standing with their back toward the camera.

But their name plaques were all sitting on the tables in full view of the camera. Oops. It wasn’t obvious to the casual observer, but because I have an eye for security, the plaques were a glaring red beacon.

After the presentation, I pulled the missionary aside and pointed out his error. He was grateful that I had seen the mistake and for my discretion in quietly pointing it out to him.

Another time I watched a jihadist training video. The video included a clip that the jihadists had captured from a US church’s live stream. On the video, in the middle of the church service, a blonde teen was telling about how she had visited a Muslim nation and had violated local laws in her attempt to spread the gospel. The church audience cheered, but the jihadists used that video to motivate their recruits. Oops.

1. Be Careful with That Picture or Video.

Churches all around the country like to post photos of the missionaries that they support. They love to live stream their services so shut-ins can watch online. That’s great. But we also need to be wise. There might be a time where it’s appropriate to take down that photo or to turn off that live stream.

On social media, we love to exclaim about how our sister-in-law is doing such terrific work in such-and-such country. To be helpful, we’ll even post their picture and their contact information. Oops.

The Classic Amplified Bible Edition (AMPC) quotes Jesus in Matthew 10:16: Behold, I am sending you out like sheep in the midst of wolves; be wary and wise as serpents, and be innocent (harmless, guileless, and without falsity) as doves.

The Ed Eby translation would say something like: It’s a cruel world out there. There are actors that intend to do you harm. Be wise and diligent to watch your back. At the same time, show your kindness and authenticity, trusting God to cover your mistakes and oversights.

Not that I am trying to replace the Word of God. I’m just trying to put Jesus’ words into something that I understand a little better. Your heart may produce a little different wording.

Another verse that is apropos to the conversation is Romans 12:18 New International Version (NIV): If it is possible, as far as it depends on you, live at peace with everyone.

I believe that also means honoring the host country, as long as we are still obeying the higher authority—God.

A sister mission agency told me of a story where a “social media expert” had visited the country of one of their missionaries. This “expert” had posted pictures of many local people and was loudly declaring the host government to be evil and corrupt. This person was trying to raise political pressure to embarrass and debase the local government leaders, having no thought of the ill effects she was having on the individuals that she photographed. The host missionaries were aghast at their guest’s actions. They feared for the lives of each local person that had been posted to the Internet.

There’s a tension between appropriate situational awareness and trust in God. He doesn’t want us to live in fear (2 Tim 1:7). At the same time, God doesn’t want us to childishly flaunt our safety and take for granted that he will always clean up our messes.

When stories are posted about host countries at WorldVenture, we seek to honor its governments and maintain good relations where all possible.  Pains are taken with each of our colleagues to make sure stories go through filters before the publish button is hit or a status update is posted on WorldVenture social media. Understanding the country and its politics informs the decision on how the story is written or what pictures are posted.

3. Utilize Your Artists, Writers, and Creatives When Promoting a Missionary

What is your missionary teaching? Instead of posting “Jane Doe, a Missionary from Qatar teaches about how to reach Muslims,” use your photographers to create a graphic on a verse she is teaching, and instead say, “A speaker from WorldVenture is visiting us on Sunday. She will be teaching (Chapter/Verse).” Post this without any names, locations, or specifics. Have a graphic artist create an interpretation of what the speaker is speaking on instead. The art on social media goes a long way for searchability and shares. How can your people relate to her topic? Connect the dots using your storytellers to help your congregation become emotionally involved in missions. For more ideas on how to tell your missionary’s story, check out Open Doors social media channels. WorldVenture’s own social media takes the very same precautions when talking about missions, even stories from secure areas.

So How do You Know What’s Appropriate to Post and What’s Not?

Either the missionary or their sending agency can give you direction on what is appropriate. If in doubt, leave it out. You can also coach your short-term mission teams on what to say, what to photograph, and after getting instructions from the sending agency or missionary, carefully create a plan. The social media expert’s agenda could have been avoided if team leaders had checked out her social media profiles and gone back through the history of her postings.

If you’re a missionary and are reading this with your own questions, let’s talk. You are the expert on your environment. I know a lot about computer security. Between us, we can come up with a good plan.

IMB: What Your Photos Say About Mission

In his personal life, Ed Eby has recently become a top-selling novelist and writer. For 15 years, Ed and his wife, Sue, worked in inner-city missions in the ghettos of Washington DC. They did drug and alcohol intervention, prison ministry, and street ministry. They helped to plant a church that is still thriving today. He also is a musician and songwriter and currently in Florida receiving treatment for Lyme’s disease. Connect with him on Facebook.