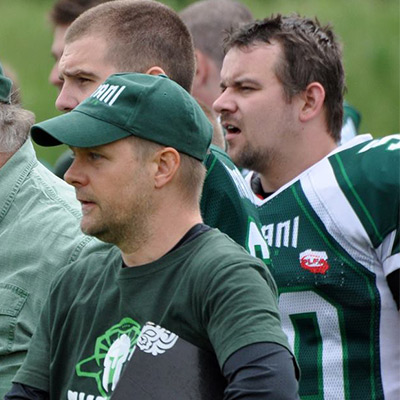 Baptist Pastor Tackles Rough and Muddy Side of Life in Poland

Randy Hacker can’t yell at the people attending his Baptist church in Lublin, Poland. As a pastor and field coordinator, he finds himself in a facilitating role as the gracious leader a church expects.

But not on the football field. As the defensive coordinator for the Lublin Titans, Randy can be as intense as he needs to be. His players, a mix of mostly 20-something professionals joining in on the Polish craze for the sport, nicknamed him “Reverend.”

“It’s nice to have that change of pace in leadership,” he says. “Being a football coach helps me as a pastor. I’m more direct in my leadership, and that’s probably good because Poles expect that of a leader.”

The popularity of American football in Poland has exploded in recent years, with more than 70 teams in 36 cities. The Lublin Titans, a semi-pro team that started in 2009, have been a successful part of the city’s community. Randy describes the team’s games as family-friendly events, not unlike minor league baseball games in America. Sometimes, as many as 600 fans show up. Randy is also the head coach of the club’s junior team, a program for high schoolers.

“We have guys who are too big to play soccer. And we get some guys who’ve had a violent past. Football is a legitimate, safe outlet for some of that.” For the Polish people, American football is appealing for many reasons.

“They love American stuff,” Randy says. “We have guys who are too big to play soccer. And we get some guys who’ve had a violent past. Football is a legitimate, safe outlet for some of that.”

Given the increasingly common pushback against the aggressive nature of football, Randy has wrestled with whether the sport is something he can encourage as a Christian leader. But Randy—along with the other coaches on Lublin’s team—have no tolerance for any outbursts off the field. They constantly tell the players not to use their physical strength to hurt others.

“It comes down to whether football is encouraging the violence, or helping guys who are already bent that way to manage it, and I think it’s the second,” he said.

“His mom said, ‘Without football, I don’t know if he’d even be alive. He probably would have killed himself.’” Take, for example, one of Lublin’s players. With self-inflicted scars over his arms and chest, the young man’s rough past was obvious. Once he started playing football, he stopped his hopeless, self-destructive habits and turned his life around, according to Randy.

There’s also the woman who met Randy on the streets of Lublin, telling him about her son who played for the team. When he was 18, his best friend died in a terrible car accident. The boy barely left his bed for nine months. When another friend dragged him to one of Randy’s football practices, everything changed.

“He’s small and kind of slow, but he’s one of the hardest working players on our team,” said Randy. “Nobody really gave him much of a chance, but he stuck with it. His mom said, ‘Without football, I don’t know if he’d even be alive. He probably would have killed himself.’”

Randy joined the team during the fall of 2013 as the special teams coach, but later moved to defensive coordinator and serves on the team’s board. The Titans’ website identifies him as a “Baptist pastor.” As far as his football experience goes, Randy played two years of football at a small Wisconsin college and jumped at the opportunity to add an athletic component to his life in Lublin, in addition to his leadership at Lublin Baptist Church.

The Lublin Titans don’t know quite what to do with this Baptist pastor. For one, the clergy members they’ve known are not usually the football-slinging, play-calling type of men. The first six months, he had one spiritual conversation, and that was with the quarterback, a committed atheist. The next season, the defense started improving their stats and being successful, and Randy was able to have six conversations with players about God—in one evening.

“I think if our defense had been really bad, they probably wouldn’t listen to me about other stuff too,” Randy said. “We need to do our best and be good at what we do, and that does lead to other opportunities.”

These deepening relationships with Randy’s players represent a broader movement toward the Gospel within Poland. In Randy’s first 12 years of Polish ministry, his church baptized three people. In the last three years, he has seen 11 baptisms. In the last 15 years, he only witnessed one church plant. Now, just within the past month, he’s seen three new church plants begin.

For a pastor who was ready to quit in 2009, these new developments are huge, as Randy thinks he could have missed out on the Polish people’s hearts turning to God.

“Something is starting to happen,” he said. “I’m looking forward to seeing what God does in the next few years.

And the Lublin Titans may just be a part of that.

WorldVenture has had an evangelistic presence in Poland since 1993. In addition to Randy’s ministry, WorldVenture is involved in sports outreach around the world, including a basketball ministry for children in Senegal, Gaelic football in Ireland, and an UPWARD basketball program in the Czech Republic.