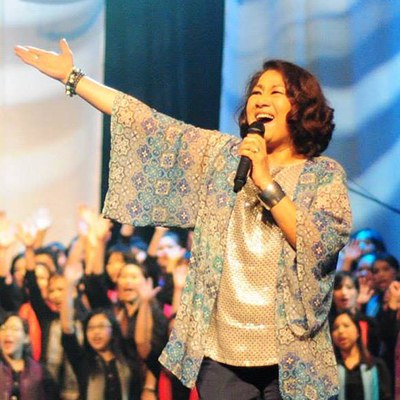 UPDATE (Oct. 1): Bola Taylor performed her concert Monday, Sept. 1. The livestream video is available for those interested in viewing.

Bola Taylor, a WorldVenture missionary in Japan, is known for her incredible musical talent and joy. Along with her husband, Ken, she leads 70 choirs with over 1,000 members in black gospel music, a phenomenal popular past-time in Japan.

In February, Bola was diagnosed with ovarian cancer. Many have followed her journey as she has opened up about her joys and struggles, even as the cancer has become inoperable.

“But watching this talented performer come to terms with her fate on her Facebook wall has been a profound experience, for in death we face the great equalizer and it is in that valley of the shadow that we learn not only what people are made of, but also whether the religious devotion practiced in church, temple, shrine, synagogue or mosque are mere words or something that truly taps into the power of the Divine.

While I’m sure there are those who can put on a brave Facebook smile and, caught up in religious delusion, spout words of fake hope about the endless glories of heaven and such, as I watch Bola grapple with her prognosis I don’t sense any of that. She is grounded in reality-the reality of leaving behind work she has loved, three devoted children and a husband who didn’t bargain for any of this.”

On Sept. 2, the Taylors communicated that they were beginning to look for options to keep Bola comfortable instead of finding a cure for the cancer. Ken wrote:

“The prognosis is that no operation or even chemo will resolve her present situation. In fact, any surgical intervention or radical treatment from this point will just worsen her present condition quickly. And so, finding a medical cure at this point would prove to be futile. We are therefore being advised to move into the next phase of palliative care/quality of life (maintenance and pain control only).”

Ten days after the Taylors found out Bola’s cancer was inoperable, they had found suitable hospice care for her back at their home. “Bola is at total peace and fully surrendered to the Lord about her future. At the same time Bola is full of hope!” Ken wrote in another update on Sept. 12.

“How is my heart in all these you ask? You know the unexplainable peace that can only come from God? He has apportioned me abundantly. He’s spared me going through the usual stages of grief & allowed me entry into the “Acceptance” phase without fanfare. I suspect that should I have gotten stuck in denial, anger, bargaining or depression, it would not have been pretty…

Oh, I told Dr T there is a 4th option to my condition. It’s called a MIRACLE. Should the Lord decide to heal me in that manner, I have no doubt He could do that. I just hope Dr T’s heart is strong enough to take the shock!”

As of now, Bola is preparing for a final concert, performing next Monday, Sept. 21, at the prestigious jazz club, Satin Doll, in Tokyo. The video of this performance will be livestreamed for those interested in watching.