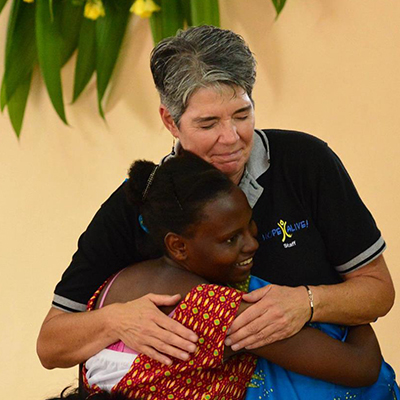 Why Catharine Coon Won’t Stop Serving the Children of Uganda

Inside the Sudanese refugee camp, Agojo, sat families in mud huts trying to keep safe from the rebels. Catharine Coon was among them, crying out to God to protect these families. The infertile land of Agojo (meaning “Rocky”) was just one of the several camps Catharine visited where she listened to Ugandans’ pain-filled stories— parents killed, homes destroyed, and children chased by rebel soldiers. Catharine said children had to flee into bushes to hide from the rebels. 30,000 children were abducted in the midst of the civil war.

Mungula was another refugee camp Catharine visited, which sheltered disabled adults and orphan children. Like Agojo, the camp was desolate, resembling an unhealthy village: few mud huts and little activity from the people, except this land was fertile, which should have been an advantage. But it was here the rebels attacked five times in five weeks, as the crops attracted them.

“I asked God to protect these people, and yet their camps would be attacked again,” Catharine said. “I remember crying out to Him: ‘Prayer doesn’t work.’ He never explained how prayer worked, but as difficult as it was, struggling and confused as I was, I found myself drawing more and more to prayer.”

Catharine, Director of Hope Alive! in Uganda, has been a missionary with WorldVenture since 1988. After a short leave of absence in 2002, Catharine returned to the mission field with a clear direction from God. “God spoke to me very clearly and said, ‘I want you to return to Africa and focus on children at risk.’”

In October 2002, Hope Alive! was born. Hope Alive!, a relief and development project, serves orphans and fragile families in Uganda. The project strives to impact the children and families spiritually, physically, emotionally, educationally, and socially—aiming to break the cycle of poverty they endure. The project works with local schools and churches in order to achieve this goal.

Hope Alive! (formally Children of Hope) grew rapidly. “We started with 30 children and three mentors and we were very quickly at 200, then 400,” Catharine said. “And in the midst of that there were times when it was scary for me, because of the size of it. I didn’t have training for what I do. I knew nothing about organizational leadership or finances.”

She said God challenged her with how fast the program was growing. “I found every time I put the brakes on, the brake pads went out very quickly,” Catharine said. “When God is calling you to something, you need to go at it wholeheartedly. Sometimes it feels like jumping off a 50-foot cliff into water, but you just do it.”

Hope Alive! began with anything but hope. When Catharine and her leaders introduced the vision of the program to children at Mungula, there was no response. But one young man spoke up— Franco. Franco stood up and said, “Thank you so much for coming. The world has forgotten us.”

“That just pushed my heart,” Catharine said. “We enrolled the children and told them we would find them sponsors.” At first, the program enrollment rate rapidly grew, but soon came to a halt, as families started refusing to enroll their children. Catharine said, “[These families] had been told things would happen that never did…It was better for them not to put their child’s name on a list than chance being devastated one more time.”

But Catharine did not lose her enthusiasm. Catharine and her team began giving clothes and school supplies to the enrolled students. “It was the first time we saw smiles,” Catharine said. She remembers Franco declaring, “When you came to us and said we will be called children of hope I laughed, but now I know we are children of hope.”

“I realized we were helping to give the children an identity,” Catharine said. “They were given value and worth and significance as being a part of Children of Hope.”

Catharine began researching the meaning of hope, looking up every reference to the word in the Bible. Through her research, Catharine came to her own definition of biblical hope: “The confident, active expectation of good based on the character of God.”

She said it is because of God and who He is that people have hope. “It is an active hope, not one that sits backs,” she said. “If there is something that can be done, biblical hope will do it.” Catharine teaches this to Hope Alive! students: to see beyond their current reality. “Just because something is not yet doesn’t mean we need to despair,” she said. “Maybe justice is not here yet but we can see the possibilities and then we can begin acting on them.”

Even so, the road has not been easy. A young man, who was a university graduate and mentor in Hope Alive!, had a mother-son kind of relationship with Catharine. “We had a great relationship and he called me mom, but then we found out he was taking money from us,” she said. “It was heart-breaking.”

Catharine and the program leaders shared what happened with the other students. After the discussion, one of the high school-aged leaders began telling Catharine about his difficult week. She listened, anticipating he would ask her for prayer. But instead, he shared a Psalm with her.

“He looked right at me and said, ‘I want you to know that even though this is difficult God is with us. He will not forsake you,’” Catharine said. “He was coming to me not asking me for prayer but to comfort me. That was beautiful and something I never anticipated when I first started this project.”

Catharine said it has been a privilege to watch the Hope Alive! alumni grow. One former student has a small cooking business and he asked Catharine if any of the other students had trained in cooking or catering. “ His first choice was to hire someone from Hope Alive!,” Catharine said. “That was a joy for me to see one of our alumni in a position to hire another alumni.”

Catharine has big future goals for Hope Alive!, as the need in Uganda is still great. Ugandan classrooms are overcrowded (about 100 students per class), the buildings contain no windows or doors, and only pieces of what once was a whole chalkboard remain on the walls.

“The schools in particular are just horrific. We finally decided we just can’t keep sending our kids to these schools,” Catharine said.

That’s why donations are funding a school being built for the Hope Alive! students. “We want it to be a high-quality school with 25 students in a class and connection to internet, a high standard of teaching, no matter where you are comparing it to, with a strong Christian foundation, where God is the center of all the teaching,” she said.

Catharine and other leaders also want to start a primary school focused on agriculture. “There is now a generation, due to the war, who does not know how to plant crops,” she said.

In addition to the school, Catharine said Hope Alive! plans to have a nursery, in order for the parents to be able to work, as well as a family resource center. Hope Alive! is also in the process of buying another piece of land for a church and a soccer field. “We would like to put in a soccer field and have a good sports program to draw the youth in,” she said. “Looking at the future of the country, the children have to be well-educated in order for the country to move forward.”