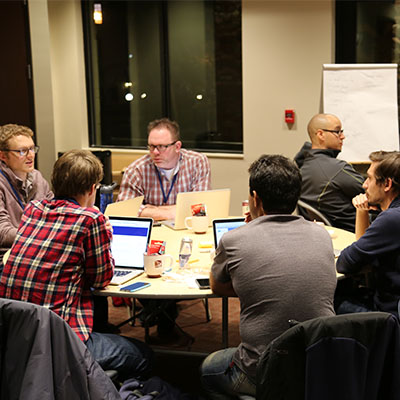 For many Christian techies, the extent of integrating their faith and work often ends at running PowerPoint slides at church worship services. But at the Rocky Mountain Hackathon, held Nov. 6-8 at Colorado Christian University, around 45 tech professionals had the opportunity to use their skills for the glory of God and collaboratively build technological solutions to real global challenges.

WorldVenture helped organize the Hackathon, in conjunction with Leadership Network and Code for the Kingdom, and with special thanks to Gloo, Church Community Builder, and Faith Comes by Hearing for event sponsorship. On Friday night, sponsors and other partners pitched challenges to attendees, who proceeded to form into groups based on projects that interested them. Some of these challenges included ways to disrupt sex trafficking with technology, helping people around the globe safely access the Bible in their own language, and fulfilling the needs in and around local communities using a new mobile app.

Isaac Lewis, who was on the winning team for creating the app Neighborly, moved to the Denver area three months ago, eager to connect with like-minded Christians in the tech world.

Neighborly won a $500 prize for using CCB’s API (application programming interface), as it created a way for members of a church community to share their needs as well as their skills. What sets it apart from other sharing websites, like Craigslist, was the ability for members on the app to join a small group to increase the network of community sharing even more. “We want to introduce you to your community in a whole new way,” said Isaac.

The $500 prize for Best Overall Project at the Hackathon went to the Bible Translator’s Assistant, which tackled the need for increased efficiency in Bible translation. The group created an easy-to-use interface that broke down Bible sentences into their smallest semantic elements. These elements can then be used by linguists and translators to create accurate, high-quality translations into minority languages.  The project’s leader, Matthew Rodatus, said this method can quadruple the speed of the translation process, making the whole Bible that much more accessible to minority language speakers.

“We want any average person to be able to do it, give them a little bit of linguistic training and then they can go in and make the interface intuitive,” said Matthew.

The anti-sex trafficking team, led by WorldVenture’s Adrienne Livingston, created Lifeline, an app that won the People’s Choice award at the Hackathon. The app created a web-based way to show and share areas on a map where people experienced instances of abuse, harassment, or even witnessing possible transactions.

“This would actually be good for youth, if girls could see what’s going on in their area,” said Adrienne. She hopes to connect The EPIK Project, an anti-sex trafficking organization, with the work her team created in the future.

The winner of the $500 prize for Best Overall Project started before the Hackathon was Outside the Library Box, a tiny device that creates an access point for free WiFi. This provides people in developing countries access to the internet on their own devices, as well as easy ways to learn about the gospel.

“I’ve been to a couple different Hackathons and one of the biggest things I’ve been looking for, and felt that every other Hackathon was lacking, was the Kingdom purpose,” said Josh Krueger, who worked on the project.

WorldVenture appointee Nikole Hahn said the Hackathon is a much-needed outlet for Christians to apply technology to their work. “Christians underuse it, and I think if [they] all got on board and used the tools that the secular world is using, we could really impact the world for Christ in massive ways.”

At the event’s closing, Chris Armas with Code for the Kingdom encouraged many of the participants to continue working and developing their projects and their added networks from the event. “It’s not about what happened here. It’s where you take it from here,” he said.