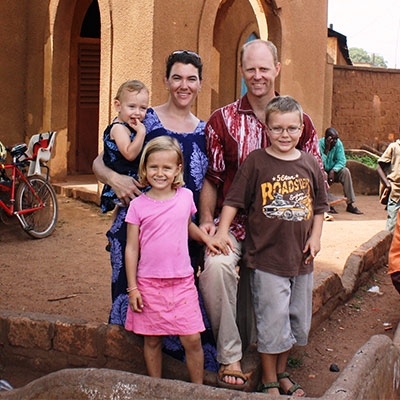 Living in Kankan, Guinea, Nathan and Becky Kendall keep an emergency suitcase packed and ready to go – as do many of their peers. Having been through 10 attempted or successful government coups in the last 11 years, the family of five is no stranger to contingency planning.

In some respects, the preparations to return back to West Africa during the fall of 2014 were nothing new for the Kendalls. They still planned to have their emergency suitcase, but this time took a few more supplies: bleach, protective gloves, and masks. They educated their children about the dangerous disease spreading across West Africa. The health crisis that had gained widespread attention from American media had now become an immediate reality for them.

Nathan and Becky first heard about Ebola in December 2013, noting the spring flair-up and the specific areas in Sierra Leone, Guinea, and Liberia where it was spreading. Becky, with a B.S. in biology, recognized that while Ebola was just one of many communicable diseases common in Africa, it posed more dangers than most. The lack of effective vaccines and treatment facilities combined with the high death rate put Ebola in a league of its own.

Still, no known cases of the virus had occurred in their ministry region, and none of their colleagues had left, so, on Sept. 8, the Kendalls arrived in Guinea to continue their work.

“Guinea’s not a really stable place,” they said. “This just felt like another high-stress situation. But we had things in place; we set up parameters and checkpoints.”

The misconceptions of Ebola

According to the Kendalls, the way Guineans in Kankan approached Ebola wasn’t carefree, but it wasn’t good either. For one, some thought the white people were spreading the disease, because western health workers started pouring into their country during the outbreak.

Some Guineans thought Ebola wasn’t real, that it was all politics. Their government had misled before and was doing it again. Nathan, who attended the regional health meetings in Kankan, said the communication from officials was not accurate, and few people knew what exactly was going on.
“The medical community was really guarded in what they said, and that made it difficult for people to know where they could go for health care,” he said.

Meanwhile, the leaders of the dominant religion in Kankan were saying Ebola was not a problem for their people, and only affected others in the animistic forest regions.

The Kendalls entered this environment of denial with caution. They limited the times they went to the city, kept their kids more at home, alternated who went to church, and introduced a bleach hand washing station at their home. The nationals thought these precautions were ridiculous, but the closer Ebola cases came to Kankan, the more people started to worry. They began to look to the Kendalls to educate them on Ebola.
“As people heard stories that got closer to their reality, people’s behaviors changed very quickly,” the Kendalls said. “People wanted bleach-washing stations; they weren’t making fun of ours anymore.”
Eventually, persons with Ebola traveled to Kankan, and soon after, six cases of Ebola were reported in the city. That was a trigger point for the Kendalls, because those six cases were spread out across the city of nearly 250,000, with no telling how many other people had come into contact with the virus.

The main hospital proceeded to quarantine 25 of its staff, and people stopped going there for medical care. In addition, trade diminished in the city. None of the schools opened for the new school year, including the university. This had a huge ripple effect on Kankan’s economy, where the unemployment rate was already high prior to the outbreak, and on the Kendalls’ church, where the major financial contributors are educators who lost their paychecks.

Nathan and Becky calculated their decision to leave, keeping WorldVenture’s best interests in mind. With no quality medical facility, the Kendalls didn’t have many options when their family became sick with malaria and strep throat. They usually traveled to Mali for their healthcare, but no one was allowed to cross the border with a fever. With poor medical options and no way to prove a less serious sickness was not Ebola, they did not want to risk WorldVenture having to pay exorbitant fees (I am avoiding a specific number because I can’t verify it) for specialized evacuation planes.
Their five-year-old becoming sick proved a major test case and raised the stress level.
They remember thinking, “If we can’t prove this isn’t Ebola, do we put her on that van that travels eight hours to the Ebola treatment center? Do we go with her, with other people who possibly have Ebola?”

Of course, the Kendalls recognized that some nationals would not be thrilled at their departure at this crucial time, so WorldVenture wrote a letter requiring their departure. Nathan and Becky, along with the other WorldVenture missionaries there, had to evaluate what was a manageable risk for themselves and the organization.
“If we had a quality medical facility that we could trust, that would have been a completely different scenario for us,” said the Kendalls. “It wasn’t so much Ebola as much as the implications. No one was prepared to deal with it.”
The Guineans understood what was going on in the American media regarding Ebola, but they were still sad to see them leave. And yet, the level of trust Nathan and Becky have built over the years helped with the transition.

“We spent about four years attending the church we go to without people ever really talking to us because they’d seen missionaries come and go and they’d realized missionaries don’t stick,” they said. “After they’d seen us go through enough hard things in our lives and come back, then people started being willing to talk to us.”

They left Kankan Nov. 11, spent 21 days in quarantine, and then left for the U.S. The departure was difficult, knowing they were leaving friends and colleagues in crisis.
“You work through it, you talk through it, you apply your reason. Your emotions speak loud and you also talk with God about it, and you see–based on all that–the best way forward.”

An understanding of death

Above a cemetery in Guinea, words read, “We were once like you; someday you will be like us.” Death is not foreign to a country racked by disease and poverty, unlike the sterile hospital rooms of America. Thus, the attitude toward Ebola–yet another disease Guineans barely understand–tends to be fatalistic.

“It’s not the first epidemic. In our time, we’ve had yellow fever, cholera and other epidemics,” said the Kendalls. “They understand death.”
So far, 20 deaths and 31 cases of transmission have been reported in Kankan. No one is going to school. The church is hesitant to gather together. And yet, glimpses of hope remain. Ebola is beginning to be contained, although small pockets still flair up. As of Jan. 21, cases of Ebola in Liberia have dropped to low numbers.

In addition, Ebola has created an increased awareness of where Guinea is and people are more willing to pray for the country, maybe even to work in Guinea. The Kendalls hope to return in June, depending on whether the outbreak is contained and Kankan has a treatment center.
And among the Guineans they specifically work with, it’s been a time of refinement.
“You have people that have no income who are still volunteering to teach, and they’re doing it because they say, ‘That’s how God made me,’” said the Kendalls. “That’s a change in their lives.”