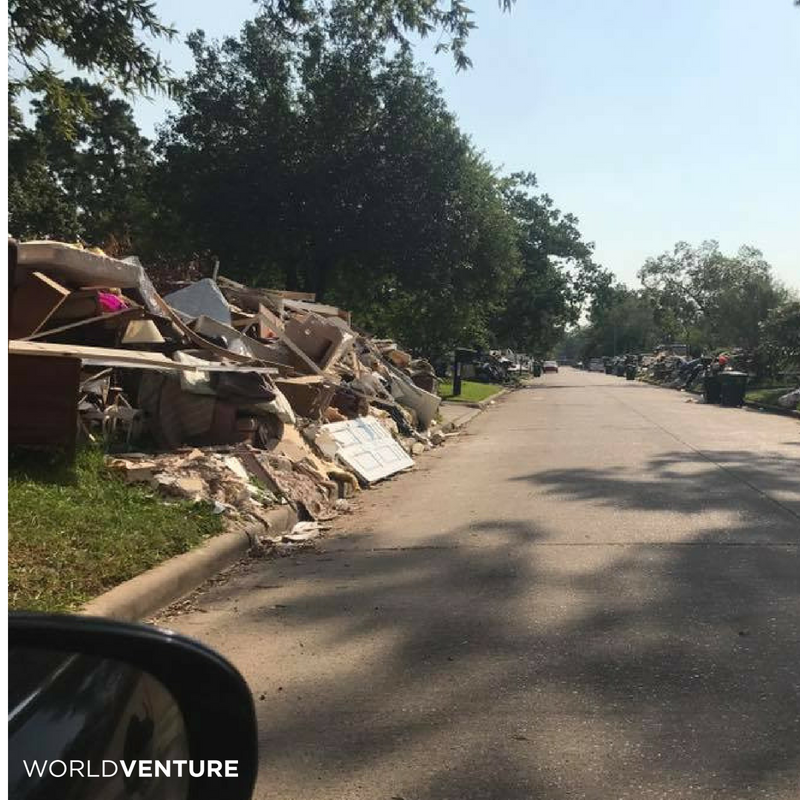 According to CNN, Hurricane Harvey broke rainfall records in 2017, and by Sunday, August 27 of that year, experts said, 27 trillion gallons of rain fell over Texas before it downgraded to a Tropical Storm. One-third of Houston flooded causing 8 million cubic yards of garbage. The storm ravaged 100,000 homes, causing 30,000 people to seek emergency shelter. Today is the one-year anniversary of Hurricane Harvey, and we reflect on God’s redemptive power through our workers and church partners.

Terri Olson from Family Bible Church in Kingman, Arizona said, “Even though it has been almost one year, I still can’t think about Hurricane Harvey or the city of Houston without getting emotional and just a little teary-eyed.”  She recalled watching the Weather Channel coverage days following Harvey’s landfall. “As boats went up and down residential streets transporting people and pets and just a few precious belongings to higher ground, I’m sitting in my recliner in the desert trying to wrap my mind around that kind of flooding, all the while thinking, I need to go.  I want to help.”

Terri prayed and struggled through her excuses. “I work full time. I don’t have the money to fund the trip or take off work. I don’t know where to start.” Her pastor asked her to pray to God for provision. Another member of Family Bible Church approached Terri with the same conundrum. How could they spare the time or the money?

Family Bible Church of Kingman, Arizona support Lloyd and Jan Chinn as workers. The pastor received an email on that same day from Lloyd that said his home church, Crossover Bible Fellowship, was spared from the flooding. His son, Joseph, had begun coordinating relief effort teams. Lloyd ended the email with, “Would your church pray for them?”

The pastor shared this email with Terri who immediately contacted Lloyd. By Sunday, she and her crew went before the congregation to share their desire to help. Throughout the following week, Terri and her team accrued supplies, financial support, and a myriad of other donations that poured in from their church and from the residents of Kingman. “By Monday, September 11,” she said, “we had a team of eight with two vehicles and a cargo trailer loaded and headed east.”

But serving in a disaster area wasn’t easy.

Terri explained the hardships. “Crossover became our home away from home and our entire team claimed it as our ‘home church’ in Texas.  We were a demolition crew and our job each morning was to collect the address(es) of homes we needed to help and off we went. By now the water had receded and roads were open so travel wasn’t an issue.  However, the excessive heat and humidity meant that mold was the number one concern.  Anything the water had touched had to be removed including furniture and clothing, carpet and flooring, cabinets, drywall, and insulation.  In five days, we went to eight houses and did whatever needed to be done.” Many churches in the area came together to help, but social media was abuzz.

A meme circulated around social media that Snopes later debunked. “The meme was shared on 29 August 2017, just a few days after Hurricane Harvey made landfall in Texas — and it seems highly unlikely someone conducted a survey of all of the churches in Houston during this time. Although we don’t know the exact percentage of churches that opened their doors (or the number that couldn’t, due to flood damage), we have come across multiple reports of churches coming to the aid of those in need in the wake of Hurricane Harvey. (emphasis added)”

“He [God] brought a diverse body of Christ together in unity to meet the need by serving thousands who were also from diverse backgrounds. The storm brought people together who would have never connected ordinarily. The church being unified in service was a beautiful site.” Lloyd commented. “The stories that are most vivid are the ones that involved people coming to faith in Christ through this tragedy. There were hundreds of people who had gospel encounters and were introduced to Jesus Christ because of Hurricane Harvey. One day of devastation has brought about eternal life to hundreds, if not thousands of people.”

Terri shares with our digital worker the deep impact of serving with Lloyd Chin and Crossover Bible Fellowship: “My final thought is this, no matter your age, talents or skill sets, God can use you in ways you never dreamed of if you are just willing to let Him.  We have no idea the blessings in store for ourselves if only we would, like Isaiah, say, here I am, Lord, send me.“

One year later, Houston is still emerging from the disaster. The Washington Post says, “Thirty percent of those who experienced Hurricane Harvey’s onslaught on the Texas Gulf Coast say their lives remain upended a year later, and nearly 42 percent say they are not getting the help they need to rebuild their flood-ravaged homes, according to a new Kaiser Family Foundation/Episcopal Health Foundation survey released on the anniversary of the natural disaster.”

Thank you to the many partners, workers, and other organizations who are helping to rebuild Houston and share the hope and renewal of Christ.