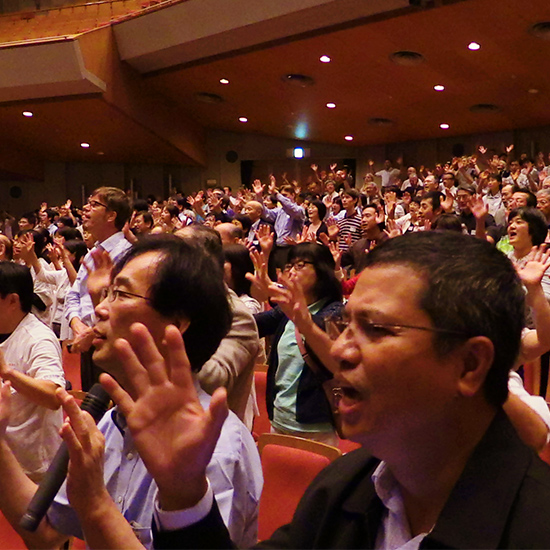 Japan recently celebrated the 50-year presence of its churches—complete with martial arts, gospel singing and the gathering of a large church family.

Among the headquarters staff were Jeff Denlinger, Marty and Denise Shaw, Chris Wynn and Jarred Butler. Jeff presented the churches with a plaque honoring their faithful service to bring the Japanese to Christ.

According to Marty Shaw, who served in Japan for more than 20 years, the event celebrated WorldVenture reaching its goal of creating thriving churches.
“Our goal is not to be in a place forever,” said Marty. “Our goal is to see churches started that will reproduce themselves, not only within their country, but be involved in missions beyond that.”

The Conservative Baptist Foreign Mission Society (now WorldVenture) entered Japan directly following World War II at the request of General Douglas MacArthur, who thought missionaries could solve the country’s spiritual problems. CBFMS missionaries evangelized and planted the first Conservative Baptist churches in 1964, as they were one of the first missions to enter the country following the war. By 1992, the denomination had 46 churches, becoming the fastest-growing small denomination in the country at the time.

One of the symbolic and meaningful moments of this year’s celebration was Shaw’s explanation of the old Japanese lanterns used to summon believers to church meetings. In addition, Ken and Bola Taylor—WorldVenture missionaries who use gospel choirs to spread the gospel—performed some of their hit songs. Other churches featured sword fights as a way to share their culture and their ministry.

“Historically, the work has been both exciting and challenging,” said Ken Taylor. “But through God’s faithfulness and the perseverance of the pastors and churches, the work continues. The future looks bright as there are fresh approaches to effective and innovative church planting and discipleship making.”

More than anything, the anniversary gave attending church leaders an opportunity to feel they were part of something bigger than themselves.

“It gave a full picture of the family,” said Shaw. “Some of these people are coming from places where theirs is absolutely the only church in a city of 30,000 people. They’re coming to be a part of a bigger family.”