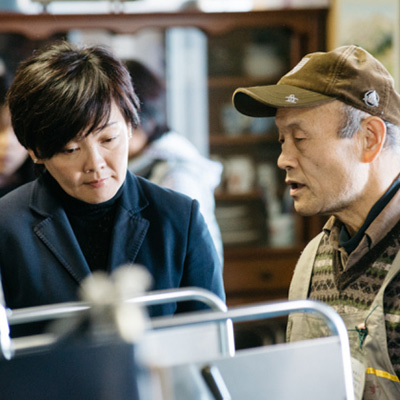 But that’s exactly what happened when Akie Abe, wife of Japanese Prime Minister Shinzo Abe and first lady of Japan, waltzed into a Tokyo church to visit Wheelchairs of Hope.

Wheelchairs of Hope (WOH), founded by WorldVenture missionary Mary Esther Penner in 2000, has collected more than 1,500 used wheelchairs, refurbished them, and distributed them to desperately needy people in 13 Asian countries.

In recent years, WOH has received national recognition in Japan by both the Foundation for Encouragement of Social Contribution as well as the International Ladies Benevolence Society. Akie may have learned about WOH through these events, according to Mary Esther, while also offering to take wheelchairs to Cambodia on an upcoming trip.

“We’ve definitely not had anyone with a more prestigious name come visit,” said Mary Esther. “It was a big deal for us that Akie Abe came and that she offered to transport four wheelchairs to WOH partners in Cambodia. Her coming is something God did.”

Akie spent more than an hour with volunteers of the ministry at the Biblical Church of Tokyo, showing genuine interest in how broken or worn wheelchairs turn into agents of hope for people unable to walk. Akie also wanted to see the church’s sanctuary, expressing that while not a Christian, she is curious about Christianity. In response, the pastor of the church gave her a translated copy of “The Purpose-Driven Life” by Rick Warren. (The Tokyo church where WOH operates is not the only church Akie has visited, either. In January, she visited the Nativity Church in Bethlehem.)

“When Mrs. Abe came, she saw people from all walks of life participating: people whom society considers successful and people whom society pities or shuns,” said Mary Esther. “I hope she saw it is not just overseas that we want everyone to be part of a community of hope, but here in Japan too.”

A few years ago, Mary Esther transitioned from the ministry’s leader to giving complete control of the operation to a Japanese director and board. Now, she functions as a volunteer, cleaning donated wheelchairs. While the attention WOH has received from Akie means more positive exposure, Mary Esther says the mundane parts of the ministry are just as moving.

“It’s a miracle that volunteers…come week after week to do some pretty unglamorous and hard work,” she said. “And several are now followers of Jesus.”

There’s also the incredible need for the wheelchairs themselves. For example, a mother in Thailand was forced to choose between working in the fields to feed her family, or stay with her son, who could not walk with her. “What mother should ever have to face that decision—for want of a wheelchair?”

Marginalized people of society have long been on the hearts of Mary Esther and her husband Mark, who have been working with the Japanese Deaf on a sign language Bible project. On a personal level, their son, Daniel, diagnosed with Batten Disease at a young age, needed a wheelchair while living with his family in Japan. Daniel is now 33, living at a group home in California, when most children with his diagnosis don’t make it past 10 years old, according to Mary Esther.

“I am so grateful to serve a God who actively cares and works in the lives of us who are nobodies because no one is too small or insignificant in His Kingdom,” said Mary Esther.

Mark and Mary Esther have served as missionaries in Japan for 32 years. Along with the Penners’ work with the Deaf as well as those in need of wheelchairs, WorldVenture incorporates a wide variety of ministries in Japan, including a black Gospel choir and mobile app development.