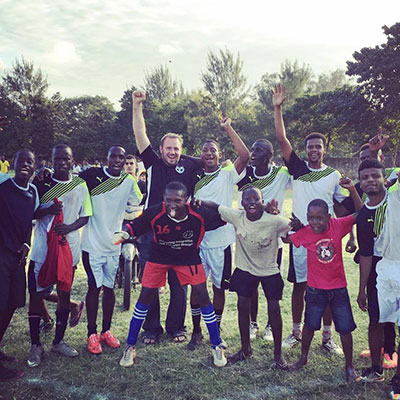 A gift made over 20 years ago has resurfaced for WorldVenture workers to bless Mombasa, Kenya, in a surprising way. The second president of Kenya gave WorldVenture the rights to a piece of land that has since remained undeveloped. Now plans are in progress to use the land for a full-size turf soccer field.

Most youth on the island of Mombasa, Kenya, play soccer on “fields” of dirt, gravel, and coral. They can’t afford to play on the green fields owned by private clubs and schools.

The street youth don’t have many options. Drug use is an increasing lure for youth who have nothing better to do—or no one to show them differently. Soccer is one of the few healthy alternatives to a life of drug and alcohol addiction.
“It’s a big struggle in Mombasa,” said WorldVenture worker Sean Nuccio. “The community is always looking for ways to reach out to youth and to keep them engaged.”

Sean and Jenny Nuccio work to empower the street youth, called “barabara boys,” through a variety of ways: drug and alcohol counseling, school sponsorships, employment assistance, housing and food, regular Bible studies, and partnership with a local church. They want to disciple and mentor youth to pursue lives transformed by Christ.

For the past five years, Sean has found soccer effective for building relationships with local Kenyans and discipling youth. Sean now plays for multiple soccer teams and coaches youth teams in local leagues.

A major supporter of Sean’s sports ministry has been his high school friend Wally Ward, living in Alaska. One day, Wally asked if they would like to have a full-size turf field. He offered to lead a fundraising campaign if Sean found property large enough for the field. Within a city of 1.2 million people, the island does not have much land left to buy and build.

But neither Wally nor Sean knew WorldVenture had property ready to use.

In the late 1980s, WorldVenture began plans to build a church in Mombasa, but needed land. Kenya’s president at the time was Daniel arap Moi. His chaplain, Dr. Jones Kaleli, had met some of the WorldVenture missionaries to Kenya through Denver Seminary. With Dr. Kaleli’s recommendation, President Moi agreed to give a piece of public property to WorldVenture for building a church.

This was around 1992. At that time, another mission organization started construction near the property given to WorldVenture, but were stopped by local resistance. Because of high public tension, the WorldVenture missionaries decided to find another location to use. The property that was meant for a church would instead lie empty for decades.

WorldVenture’s field leader in Kenya found that the property remains under WorldVenture’s ownership, according to the local land office. Located on the south end of the island, the property lies on a major road only a hundred yards from the Indian Ocean. It’s a popular gathering place for families on weekends. Despite its prime location, no one has tried to claim the undeveloped property in all the years since it was given to WorldVenture.

“The fact that we even have the land seems like God putting the pieces together,” Sean said.
Not that it doesn’t come with some challenges.

The project will cost an estimated $250,000 that will need to be fundraised. An architect needs to draw plans. The city council must approve the development proposal. But perhaps the greatest hurdle is public opinion.

Sean expects some locals may reject any land development because a Christian ministry is associated with the project, however much a turf field might be welcome. Possible religious opposition could also be intensified due to the property’s high-traffic location.

“Each step has its own challenges and each step has to work out for the next one to start,” Sean said. “Now it’s the city council and the public’s approval. After that, it’s just making sure it’s built well and received well.”

Yet the Nuccios continue to feel confident they are working where God wants them. They hope to break ground for the soccer field later this year, including lights so that youth can use the field even at night. Sean sees the field becoming a major gathering place for the community’s youth to play soccer, attend events, and receive gospel truth.

When building is finished, WorldVenture’s property will be the only public turf field in Mombasa welcoming everyone in the community to play.