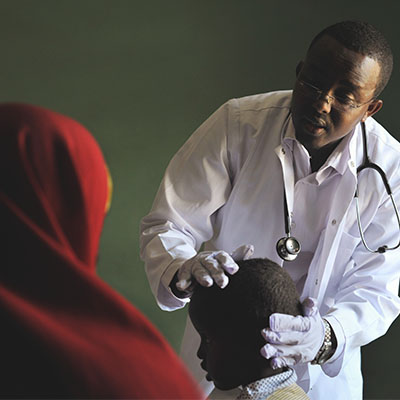 Excerpts from the letters written by Wendell Geary, a WorldVenture missionary, shed light on the trials and rewards of pioneer medical work in 1960s Indonesia. “Margie could tell lots of things about the house, the rats playing all night long on the bare beams above us as we sleep under our net. But we sleep well,” Wendell wrote to his father in October 1965.

“Day after day I am overcome with the realization of what we face in achieving our highly idealistic goals, both for the gospel and for medicine. The gospel is the thing that shakes me most…More than ever before I would love to drop it all and come home” (October 5, 1965).
Wendell was writing about setting up the medical center in the primitive jungle. With minimal resources, Wendell, along with his wife and children, struggled to maintain daily tasks with the influx of patients. “Perhaps someday there could be a tuberculosis sanitarium in Sungai Betung where the patients could support themselves by growing fruit,” he wrote in December 1965. “We often dream things like this to keep ourselves from going mad with frustration.”

Wendell often prayed for his patients before performing life-changing surgeries. One patient, a Chinese man, was so touched by Wendell’s prayer that he came back the day after his surgery, asking if God could forgive a man with sins as terrible as his. “He said that he just couldn’t get it out of his mind that the doctor prayed before surgery,” wrote Wendell in December 1968. “That is what started him thinking about his own life—without God.”
The Gearys survived a Communist guerrilla uprising and a spurt of “headhunting, blood drinking, and liver eating” in 1968. Even though their patients stopped coming for medical care, the Gearys protected 300 Chinese in their hospital and church.

Wendell Geary helped establish Bethesda Hospital, which now stands on 30 acres of land five hours away from the nearest airport. The hospital boasts 100 beds in its tropical, rural setting, where islanders receive medical care that’s desperately needed. Even more, Paul Geary, along with his wife, Rebecca, has continued in his father’s footsteps by serving there as an associate doctor.[quote_right]The influence of the hospital, beyond the civil war, has been one of the key catalysts to growing the church in Cote d’Ivoire.[/quote_right]

“When we arrived in 1998, the era of the foreign missionary worker was closing,” said Paul. “My parents were the last medical missionaries still there.”

National leadership has been Paul’s primary focus at Bethesda. In the time that he has served there, the hospital has graduated from the rudimentary wood buildings and thatched roofs of Wendell’s day, to robust pharmaceutical services and energy-efficient buildings. An Indonesian Christian board structure owns the hospital, and besides a three-month stint where Paul became the interim leader, Bethesda has become an Indonesian-led enterprise.
Keeping Bethesda running is no easy task, however. “This is a big hospital operation running in the middle of the jungle serving poor people,” said Paul. “Then you look over the past history of how God has kept it running and has always provided financially and provided for the staffing. As long as the Lord continues to bless it and use it for His Kingdom purposes, then it might be here a long time yet and we just keep going with a long-term mentality.”

When the Government Notices

When a civil war broke out in Cote d’Ivoire in 2002, many missionaries—including medical personnel—were evacuated. The head of the rebel army spoke with the director of WorldVenture’s Baptist Hospital in Ferkessédougou, communicating that he wasn’t against Americans or the doctors or the Christians. Rather, he was against the government. In fact, the rebel leader wanted the hospital to stay in operation, as he recognized the good the hospital was doing throughout his country.

“God really protected the hospital that first year,” said Diane Eliason, a WorldVenture family nurse at the hospital. “We weren’t closed a single day during the whole sociopolitical situation.”

Diane remembers how armed soldiers would walk through the hospital, armed, but none of the staff was ever harmed. For several years, the hospital was the only one to stay fully open and fully staffed.

“We’ve been respected as a facility that does quality work,” said Diane. “There’s people all over the country that know about the hospital.”
The 65-bed hospital sees 100 to 200 patients per day. In 2014, 120 people accepted Christ, a number that has increased over the years. Every day, the hospital shares a gospel presentation, and many of the staff pray and share their faith with patients when providing care.

“I’ve never had a patient—animist or Muslim—refuse prayer,” said Diane.

The influence of the hospital, beyond the civil war, has been one of the key catalysts to spreading the church in Cote d’Ivoire. Over half of the 200 churches established in the 1990s had first been exposed to the gospel through the hospital, according to Diane. Even more, the patients are treated with love and respect, something that’s not always guaranteed at private or government clinics.

The Baptist hospital in Ferkessédougou has also instituted a nursing training program. Thirty-five nurses are currently enrolled in the three-year program, where they receive Bible education as well as medical training. Many of these nurses stay to work at the hospital.

In fact, the training of doctors and nurses to be sent out to other areas has some of WorldVenture’s mission hospitals running almost like missionary-sending organizations. In Indonesia, Paul says Bethesda’s vision is to become a model training facility for Indonesian Christian professionals to come and learn. The hospital formed a sending agency, MEDGO, to send these medical personnel to other parts of the country, where 25 nurses, doctors, and administrators are currently enrolled.

The role of the mission hospital

Dr. Robert Woodberry, Director of the Project on Religion and Economic Change at the National University of Singapore, has studied the correlation between conversionary Protestant missions and a country’s democratic development. Included in this is the establishment of reliable health care in a country. Robert thinks medical missions is responsible for the overall progression of a country’s health. In fact, medical missions is effective in a significant way, beyond exclusively evangelistic mission efforts.

“Medical missions…probably have a significant long-term impact by helping to change attitudes in the broader community, and creating goodwill in ways that direct evangelism does not create,” said Robert.

Robert’s research has shown a strong correlation between the presence of Protestant missionaries and a country’s average life expectancy. For example, for every Protestant missionary per 10,000 people in the year 1923, on average countries gained 1.3 years in life expectancy. In addition, for every percent a country becomes evangelized, the average life gains .16 years.

Mission hospitals play a significant role in a country’s spiritual and physical health as well. In a time when third-world countries are developing both government and private healthcare, mission hospitals and clinics are still necessary. That’s because corruption and a lack of accountability are still common, according to Robert. Medical missionaries, because they are motivated by something other than a paycheck, will gladly staff institutions in remote, unglamorous locations.

“In a context where there is corruption and there is an underservice of poor people, mission hospitals will continue to play an important role,” said Robert. “If there’s always a mission hospital there, it helps keep other hospitals on their toes, because they know that poor people can always go to a place where they will get service.”

For Wendell and Margie Geary who pioneered the beginnings of medical work in Indonesia, this was certainly true, as they were much more than health professionals. A fellow doctor once told Wendell, “I don’t know how you’ve done this.” He was referring to the work that went beyond medicine: the preaching, teaching, administrating, and handling volatile political situations.

Wendell responded in his letter, “I don’t know how it was done either, but I can’t take the credit.’”