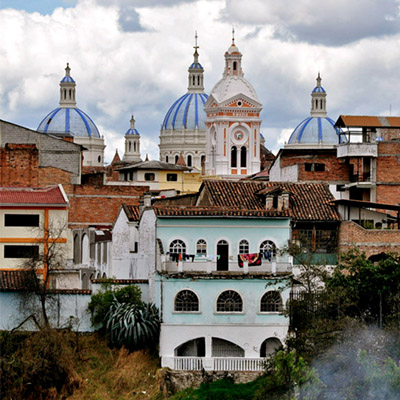 Missionary Plants Seeds of Faith in His Home Country of Ecuador

In the town of Gonzanama, Ecuador, a Catholic priest started bullying a 12-year-old boy in front of the whole school, where the priest was performing a mass. The boy’s offense was his refusal to partake in certain elements of mass, as he was not Catholic. The boy’s mother confronted the priest about this unfair treatment, and when the priest responded with laughter, she took the case to the town authorities.

However, the authorities sided with the priest, who held significant power in the town. Thirty minutes later, the priest spoke through the church’s loudspeaker, “If you are a true Catholic, come defend the faith against this cult.”

“It’s the city where I went to college, so now many of my friends have positions in the community (some have high positions), so that gives me the opportunity to easily [influence] those levels.”

Leo Calva, a WorldVenture missionary and Ecuadorian, was there that day as 80 people gathered in the town’s center with stones and sticks, ready to riot against the boy’s family. Leo was able to negotiate with the priest and authorities to avoid violence, but that did not stop the priest from ordering the townspeople not to shop at the pharmacy of the 12-year-old boy’s family.

This incident of economic and social persecution happened approximately 10 years ago, and it demonstrates the significant challenges Leo and his ministry partners face from Catholic Church leaders in the country, who view evangelicals as a threat to the unity of the Church. “They don’t like us because they hold significant power and control in those areas,” said Leo. “Gaining the trust of the people has been very hard.”

In the hopes of advocating for the persecuted family in Gonzanama, Leo approached the bishop in Loja, Ecuador about the priest’s actions. Initially, Leo said the bishop was open and engaged him in doctrinal topics. As Leo maintained the biblical narrative, the bishop stressed church traditions.

The conversation was peaceful until Leo brought up the concept of grace. The bishop argued how works bring salvation, but Leo pointed at the ornate crucifix behind the bishop’s desk.

“Are you telling me what my Lord did on the cross is not enough to save me?” Leo asked quietly.

At this, the bishop became angry and ordered Leo out of his office. Leo feared the persecution in Gonzanama would get worse after this interaction. The next day, however, the bishop promoted Gonzanama’s priest to a church in Loja as a reward for standing up to evangelicals. With the priest leaving, the persecution in the town ended, a silver lining in the otherwise painful controversy.

“The idea is that Ecuador is not just a mission field, but it’s becoming a mission force.”[/quote_left]Leo, born and raised in Ecuador, became a Christian on Good Friday in 1987 while studying at a Catholic university. He soon became involved in campus ministry before he realized God was calling him to full-time ministry. Leo studied at Rio Grande Bible Institute Texas and Western Seminary in Oregon, married his wife Maria, and then served in ministry in Oregon for seven years before realizing they wanted to plant churches in Ecuador.

Mustard Seed, the central church Leo helped plant in 2004, has grown to more than 200 members in a country that contains a two percent evangelical population. The city of Loja now has two churches, while also expanding to nine rural locations for different ministry work. “We are in the city, but we use these churches in the city as a hub for reaching other areas,” he said.

The city of Loja is the capital of the southern region in Ecuador of the same name, where Leo’s church is reaching professional middle class Ecuadorians. Mustard Seed regularly serves its communities through medical caravans, child abuse prevention, food banks, and building projects.

As an Ecuadorian, Leo says there are many advantages in how he serves the people in his churches and communities. “It’s the city where I went to college, so now many of my friends have positions in the community (some have high positions), so that gives me the opportunity to easily [influence] those levels,” he said.

Leo writes a weekly editorial in the local newspaper about social and spiritual topics, while also speaking on a secular radio show. Knowing people and the culture inside and out provides organic ways for Leo’s church to serve the community. “When we want to do outreach, they’re very open to us from the church,” he said.

But missionaries from America or European countries also have advantages to working in Loja: “One of the great things foreigners have is they are attractive to [Ecuadorians] who want to learn to speak English. They want to be friends with someone foreign too.”

Leo deals with the normal challenges every church planter faces: training leaders about discipleship, mentoring new believers, and equipping new leaders. But unique from other church planters is the open opposition they face from the Catholic Church in Ecuador’s rural areas.

Reconciliation between evangelicals and Catholics in Ecuador is difficult for two reasons: Catholic leaders view evangelicalism as a threat, while Ecuadorian evangelicals have inherited a deep anti-Catholic attitude from years of tumultuous interaction.

Leo says it takes a decent amount of time (six to 18 months) before Catholic leaders adjust to an evangelical presence in a town. “Sometimes, the first six months to a year is very hard for the new believers because they are treated like second-class citizens,” he said. “But after maybe two years, they get used to us.”

On the other side of the spectrum, Leo says approximately 70 percent of evangelical churches in Ecuador are still anti-Catholic. Evangelicals in the past were confrontational: they would accuse Catholics of idol worship if they owned artwork depicting Mary; Christians never even owned nativity sets for the same reason, he said. Although relations have improved, Leo has to constantly urge his congregations to show less condemnation and more grace to Catholics.

One golden moment for Leo was when a Catholic priest was suspended because the Church found out he had a family. After leading this double life within the Church, the priest approached Leo, jobless and desperate. Leo began sharing the gospel with him.

“When I started talking about grace, he started shaking because he never understood it,” said Leo. “And when he accepted the Lord, it was incredible.”

“The idea is that Ecuador is not just a mission field, but it’s becoming a mission force.”

To learn more about opportunities to serve in Ecuador, check out our opportunities, including a need for working with children and families at risk in Loja, as well as a need for a church planting mentor.

Please consider praying or giving to the ministries in Ecuador, including Mustard Seed Church and leadership development in Loja.