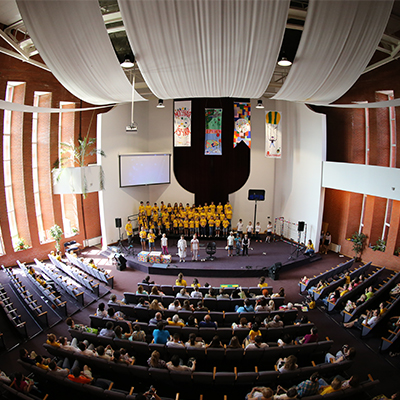 The church has a massive cross in the center of the stage, and below it a baptismal pool. The worship band alternates between Hillsong and Matt Redman worship songs, as well as Russian original worship songs and hymns. Some in the congregation raise their arms in worship; others don’t. Then comes a time for shaking hands with surrounding attendees. After a series of church announcements, the pastor gets up and delivers his sermon.

Claiming to be an anti-terrorist effort, the new policy is an amendment to a 1997 Russian law No. 125-FL, which controls missionary activity. Now, any missionary activity that is not taking place on legally registered church properties needs a special permit, along with other specific documents. The amendment will go into affect July 20.

Russian church leaders will gather at a webinar next Monday, July 18, to gain more clarity as to the legal ramifications for this law. Some of the main clarifications the meeting will address:

-What constitutes as “missionary activity?” Who can do it? What documents do missionaries need? Can someone invite a non-Christian to church? Can someone share the gospel with a friend?

-Will believers meeting in apartments for Bible study or small groups be in violation, as they are not holding these activities on registered land?

-An estimated 1,000 churches are meeting in properties legally registered under an individual. Will these be in violation?

-Will the visas of foreigners be regulated more closely to ensure the actual activity matches the type of visa?

Outside of Moscow, Russia a few weeks ago, a Russian evangelical church rallied around each other in prayer against this law. They knew it was going to severely affect the level of community, growth, and overall freedoms they had grown accustomed to over the past 25 years. And yet, they had resilience and a trust in God: despite their government, they were still going to be obedient to Christ and His Word.

“It is of no use for us to try and fight this law any longer,” said one pastor, partner to WorldVenture workers, and leader of hundreds of Russian churches. “Our country does not truly have religious freedom as we would like. This is reality. We need to ask God for wisdom and understanding as to how we can be the church in this new reality.”

The full ramifications of the amendment will not be known until officials begin interpreting and enforcing it.

“The initial impression is that the answers to these questions would not favor the church,” said a Russian denominational leader. “This is a real, valid concern.”

Fellow American Christians can be in prayer for wisdom and understanding over this next step in the slow erosion of religious freedom in Russia.