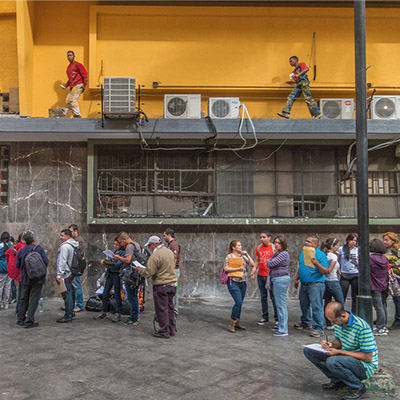 With Venezuela caught in an escalating political and economic crisis, the national middle-class people are the hardest hit by inflation rates, shortages of food and basic necessities, high unemployment, and government instability. And yet, small churches are still being planted and persevering under extreme hardship.

“The Lord’s work is still going on there,” said David Berkey, a WorldVenture worker pastoring a church in Caracas, Venezuela. “It’s more stressful, it’s harder for us, it’s harder for people in our church, but we’re seeing people respond to the gospel and seeing their lives changed.”

David’s church has seen roughly the same number of people becoming disciples every year, but the church has struggled to grow because of emigration. Middle-class professionals often cannot find work and also want to escape the high rate of violent crime, so those who can leave choose to flee the country for jobs elsewhere. “We thought about leaving because it’s dangerous. We don’t feel as secure there, but we’ve asked ourselves, ‘Who would come in our place if we left?’ and even ‘Who could come in our place?’”

One young man moved to Shanghai, China for his MBA and stayed when he was hired by the Italian automaker FIAT. Church members have so far relocated to Panama, Colombia, China, Spain, Canada, and the United States.

“That’s become part of my ministry: following up with people when they leave the country to make sure they are in a good church,” David said. “It’s more like the apostle Paul pastoring by letters.”

In response to the U.S. renewing sanctions against some of Venezuela’s top officials, President Nicolas Maduro announced this March that he would recall the top Venezuelan diplomat from Washington, D.C. On March 12, supporters and opponents of the socialist-led government marched in opposing rallies. Supporters criticized the U.S. sanctions while anti-government protesters demanded Maduro’s resignation.[quote_left]“We don’t have a political purpose there. We are not there to change their government. We are there to preach the gospel of Christ, and to spread his message, and see people transformed by Jesus.”

Venezuela and the U.S. have had tense relations since Hugo Chavez gained power in 1999. The International Christian School in Caracas used to primarily enroll children of missionaries. According to Marcus Shuflin, the school’s director, the number of workers from the U.S. entering Venezuela has steadily declined, from both faith-based and secular organizations.

If being the country with the second highest murder rate wasn’t enough, Venezuela’s new restrictions on tourist visas instituted last year have further discouraged American visitors. However, Shuflin believes that what Venezuelan people need more than anything at this time is to know Christ. “It is critical that organizations like WorldVenture continue supporting and sending workers to the field,” Shuflin said.
“We thought about leaving because it’s dangerous,” David said. “We don’t feel as secure there, but we’ve asked ourselves, ‘Who would come in our place if we left?’ and even ‘Who could come in our place?’”

David plans to stay in Venezuela for as long as possible to be an encouragement to the local believers.

“We don’t have a political purpose there. We are not there to change their government,” David said. “We are there to preach the gospel of Christ, and to spread his message, and see people transformed by Jesus.”

To learn more about WorldVenture’s involvement in Venezuela, check out the Berkeys’ efforts to plant churches and evangelize in Caracas, as well as Rocky and Sylvia Engel in Maturin, Venezuela.

How to pray for Venezuela: