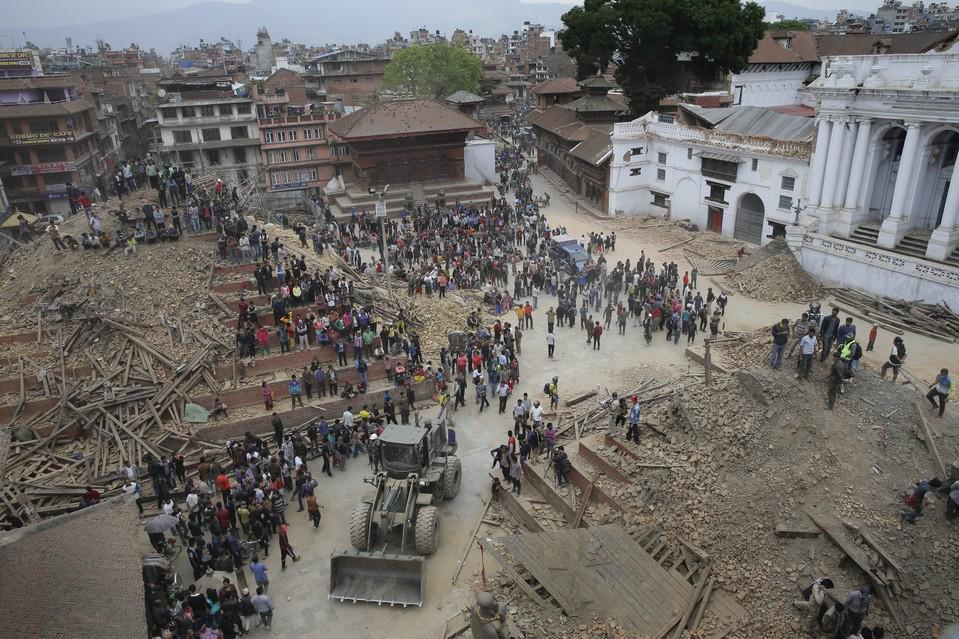 UPDATE (May 12, 2015): Less than three weeks after Nepal’s first deadly earthquake, a second major earthquake has killed more than 40 people and injured more than 1,000 in the country’s eastern region near Mount Everest.

The Nepalese have felt many aftershocks, but this most recent earthquake (with a magnitude of 7.3) has sent many people into nearby fields, fearful to stay in their homes. Buildings weakened by the first earthquake on April 25–which had a magnitude of 7.8 and killed more than 8,000 people–have now fallen.

Marty Shaw, Vice President of International Ministries, is currently returning back to the United States after visiting Nepal. He and his team have assessed how WorldVenture will be involved in helping the country after this tragedy.

“People are fearful to go back into buildings,” said Marty. “When we were in Kathmandu, there were less people living in tents, but there is still a lot of fear. It’s overwhelming; the emotional toll on Christians [and others] is pretty strong.”

In a similar manner as WorldVenture helped the Philippines after Typhoon Haiyan, WorldVenture will assist Nepal in three stages: relief, rehabilitation, and redevelopment.

WorldVenture plans to partner with many different organizations, both in short-term and long-term work. Among the projected partnerships: Nepal Baptist Church Council, Reaching Himalayas, and other key individuals.

WorldVenture hopes to raise $250,000 to meet the needs of the Nepalese. Because the people of Nepal have experienced yet another tragedy, please consider giving to help their immediate relief needs, as well as the country’s future redevelopment.

UPDATE (May 7, 2015): Marty Shaw, WorldVenture’s Vice President of International Ministries has landed in Kathmandu, Nepal and has started assessing the organization’s aid response to the tragedy. So far, he has met with foreign agencies, as well as students of WorldVenture missionaries in Asia.

34 of the 80 people in this building were killed, with two still missing.

Christians in the area have been affected in much the same way as the rest of the population, although many of their churches have been destroyed. The earthquake had struck just as many church services were winding down. In one neighborhood, the earthquake killed everyone except the people who went to church, said Marty.

“We don’t have a wide understanding of all the destruction throughout the country here in Kathmandu,” he said. Many of the rural areas—where helicopters and trucks have to deliver the aid—are finding it more difficult to receive aid, or at least affordable aid. “Part of the situation in a natural disaster is that prices tend to go up.”

In addition to recovering from the earthquake, the Nepalese have to prepare for the planting season and the rains coming in a month—an overwhelming prospect for those who have lost so much already.

“Christians are looking to see what they can do and are responding quite well,” said Marty.

On Saturday, April 25, a devastating earthquake with a magnitude of 7.89 hit the capital city of Nepal and its surrounding regions, killing more than 4,600 people and injuring more than 9,000. Although seismologists have been predicting a large earthquake in this region of Asia, rescue and emergency efforts were lacking.

Thousands of Kathmandu’s residents have taken to the streets either because their houses were destroyed, or because the intense aftershocks have made it impossible for them to find shelter indoors. The government has set up relief stations, but victims are still finding it difficult to receive food, water, and electricity.

Many of WorldVenture’s contacts report they have been sleeping in fields or open areas, either for safety or because their buildings were destroyed. In addition, entire villages have been wiped out.

“Some of my other contacts are staying in a makeshift camp tonight, but that they too are safe for the time being,” said Jonathan, a WorldVenture international worker* working in Asia. “I’m waiting to hear more information about the situation to know how to best serve them.”

Pastor Ananda, a partner with WorldVenture, said the earthquake destroyed all 200 homes in his village of Lalitpur (south of Kathmandu).

“We and our country need prayer,” said Ananda. “My house in my village is totally destroyed; thankfully my parents are safe. Many died and the whole village is wiped out. My house in Jiri is also broken and I am safe in Kathmandu with my family.”

WorldVenture seeks to mobilize relief and prayer efforts through its extensive networks. Once organizers have provided substantial emergency solutions, WorldVenture plans to bring holistic restoration to the Nepalese people through the hope of the gospel.

WorldVenture will work through its primary partnerships to make sure donations will benefit the Nepalese people. WorldVenture’s partner, International Nepal Fellowship (INF), will help in distributing and mobilizing aid workers.

According to a statement from INF: “”I am thankful to God to report that INF staff and missionaries are well, albeit shaken. We do still need to contact a few of [our] Nepali colleagues in remote areas and pray that all will be accounted for and are well.”

In addition to WorldVenture’s International Ministry Director over Nepal*, WorldVenture will work through its contacts and their networks for support.

This is not the first time WorldVenture has aided during natural disasters. When typhoon Haiyan struck the Philippines, WorldVenture provided crisis relief as well as long-term rehabilitation and spiritual renewal opportunities. One positive result: 173 Filipinos were baptized a year after the disaster.

WorldVenture will soon be deploying international workers* to Nepal, who will be doing pharmacy and veterinary work. In addition, WorldVenture international workers are active among different seminaries and Bible colleges in Nepal and throughout Asia, coordinating church planting and leadership efforts in the country. They launched the Himalayan Graduate School of Theology in Kathmandu in 2008, where Ananda was a student.