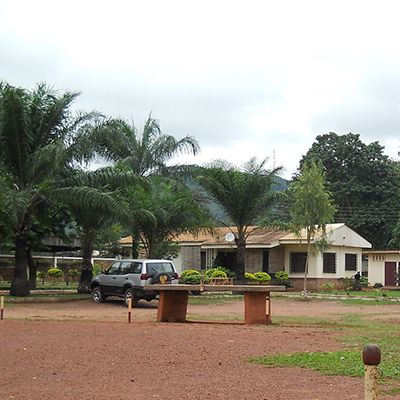 UPDATE (Oct. 1): Violence has escalated once again in the Central African Republic, as at least 37 have been killed in Bangui recently. FATEB has opened its doors to approximately 2,000 people.

According to one seminary leader:

“We are here without knowing what is coming next.

For me, sincerely it is becoming very stressful to live time to time in the situation where life is threatened. We cannot sleep well because of gunfire. Last night was very bad because they used very heavy weapons. Many stray bullets were found on the campus. Thanks to God, nobody was injured. About 2,000 people are back on the campus. Classrooms are full; tents are also full.

Our eyes are upon the Lord.”

The Bangui Evangelical School of Theology—often known by its French acronym FATEB—is one of the largest evangelical seminaries in French-speaking Africa.

Located in the heart of Africa, it’s also seen countless horrors in recent years, according to WorldVenture retiree Dr. Jack Robinson and the seminary’s president, Dr. Nupanga Weanzana. The conflict between the Seleka (Muslim rebels) and the government displaced thousands throughout the Central African Republic, which necessitated the intimate involvement of the seminary.

FATEB answered the call to help those in need and became a champion of peace and neutrality. That may be one reason why Pope Francis is visiting FATEB during his visit to the Central African Republic in November.

In the months following the civil conflict, government officials, United Nations workers, NGOs, churches, and others began meeting at FATEB to discuss picking up the pieces of the scarred country. “It became a neutral place where everybody can come and meet,” said Nupanga.

The archbishop of Bangui asked Nupanga if Pope Francis could visit the campus and address church leaders–evangelical leaders specifically–there during his visit in November. Nupanga agreed.

It all started March 24, 2013, when Nupanga and the rest of FATEB’s campus were warned not to go to church, as the Seleka rebels had taken over much of the capital. What followed was a complete desolation of the city: the rebels destroyed schools, churches, most of the government offices in the interior, and stole from hospitals. However, they left the seminary untouched, even as they destroyed everything around it.

Why did a group of Muslim rebels spare an evangelical institution when they destroyed everything else?

“It’s a miracle. Nobody can explain it,” remarked seminary leaders. “[FATEB] received hundreds and hundreds of displaced people without discrimination—Muslims, Christians— anybody that needed refuge in the crisis of the last two years came to campus.”

In addition, because most of the schools were destroyed in Bangui, FATEB’s pre-school, primary, and secondary programs exploded enrollment to more than 2,000 students. At one point, FATEB was providing shelter, food, and supplies for 4,500 refugees within its walls.

“They came to the gates; you can do nothing to prevent them. As an institution we cannot let them go. They came with their children, wives, everyone—what can you do?” said Nupanga.

The school ceased its operations for a few weeks after the initial attack on Bangui, and again from December 2013 to March 2014 when conflict grew dangerous once again.

“They killed people right in front of our gates,” said Nupanga. One of the seminary’s alumni was also killed in this repeated conflict.

Approximately 500 refugees are still living in tents on FATEB’s campus; they have no homes where they can return. “Our chaplain has done much to help them to deal with the situation spiritually,” said Nupanga.

Since 2005, WorldVenture has raised close to $3 million to support FATEB and its operations. “WorldVenture is very special, because WorldVenture adopted FATEB. This is something to be very grateful for,” said Nupanga.