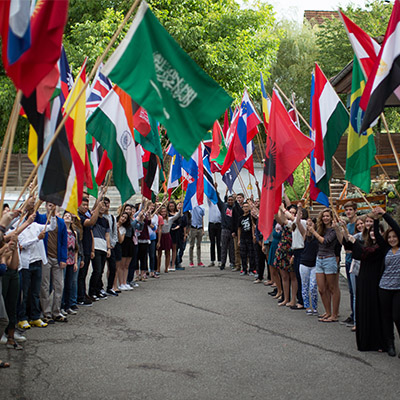 In an international classroom, imagine a young girl, the child of American missionaries, who will be fluent in multiple languages and will have lived in five different cultures by the time she is 18. She has classmates who are the children of world diplomats, and she has other friends in America she hasn’t seen for four years. She has a deep relationship with Jesus Christ, but because of her unique life experiences, she struggles with the realities of her faith. In other words, she is a third culture kid (TCK).

Many WorldVenture missionaries have dedicated their whole ministries to serving TCKs. Among other reasons, they see the potential and advantages these students have to cross cultures effortlessly for the advancement of the gospel. They want to be a part of nurturing that potential, but it hasn’t always been this way.

“Third culture kid (TCK) is a term used to refer to children who were raised in a culture outside of their parents’ culture for a significant part of their development years.”

In his book “Too Small To Ignore,” former CEO and President of Compassion International Dr. Wess Stafford recounts the horrors he endured at a missionary boarding school in West Africa (not affiliated with WorldVenture). During his six years there, the son of WorldVenture missionaries experienced verbal, physical, and sexual abuse.

Wess describes how missionaries of the past viewed caring for missionary children as a demotion. Those who couldn’t succeed in their other ministries weren’t fired; their agencies just sent them to teach missionary children, where they could do the least damage. He surmised how these “failed” missionaries took out their bitterness and resentment on the very children they were supposed to be shepherding.

Fast-forward to 2016, and perhaps the biggest change in TCK (third culture kid) education—beyond steps to insure this abuse at boarding schools never happens again—is a heart change. WorldVenture sends TCK educators who recognize their position as a calling in and of itself, and they’re passionate about guiding children of missionaries through their formative years.

A Different Kind of Challenge

“Imagine a class where you have a Korean kid from Russia that lived in Germany and Africa and is planning on going to American college but he was homeschooled, Russian- and German-schooled and has never been taught in English before.”

“Imagine a class where you have a Korean kid from Russia that lived in Germany and Africa and is planning on going to American college but he was homeschooled, Russian- and German-schooled and has never been taught in English before.”

That’s the reality that Chris Bryan faces as a teacher at Black Forest Academy in Kandern, Germany. Families come with different expectations depending on their culture and background, making for a challenging environment in which to lead and develop young people, whose passports are all different.

The students cope with their own challenges as well. Katrina Custer, another teacher at Black Forest Academy, mentioned that in a study of 150 criteria that affect student learning, the absolute worst is being in a state of constant transition.

“That’s our kids,” said Katrina. “They’re moving a lot, or they never know if they’re going to be moving, or if their visa is going to be revoked. There are kids who are in the dorm and don’t know if their parents are safe. That kind of emotional stress is huge; that’s our No. 1 challenge.”

Katrina said one of Black Forest’s students survived a church bombing in a dangerous country where her parents served, and another came from a place where she was not allowed to leave the compound where her dad taught because of safety concerns.

Jason and Sarah Quick, WorldVenture missionaries at Faith Academy in the Philippines, say that beyond the cultural challenges, their students eventually must wrestle with their parents’ call to missions.

“There’s somewhere in high school where they realize that their parents were called into ministry, and they’re not sure how they fit into that,” they said. “That’s something that is a crux or turning point for those kids’ lives. Helping them process that kind of realization—helping them catch the big picture and the vision behind that —it can be really painful sometimes, but as they walk through it, you see a whole lot of fruit that comes from it.”

“It is more than education. It is coming alongside another human being with unique and incredible experiences, hearing them, and speaking into their lives so that they can move forward and do amazing things with what God has given them.”

Chris at Black Forest adds that the spiritual mentoring offered by the staff is paramount to TCK schools. “You have students that have seen things in the spiritual realm that makes them know beyond a shadow of a doubt that God exists, but that doesn’t mean they like what happens,” he said. “They still struggle with God and accepting Him.”

It’s exactly because of these realities that these TCK educators feel passionate about investing in their students at Christian international schools. “It is more than education,” said Chris. “It is coming alongside another human being with unique and incredible experiences, hearing them, and speaking into their lives so that they can move forward and do amazing things with what God has given them.”

Many argue that international Christian schools serve to free the parents to do the ministry they’ve been called to do. While this is true, the influence these institutions are creating for the gospel is so much more than simply providing a stable education option for these missionaries and their children. When loving staff and students congregate in a space, it only follows that these schools become hubs of outreach themselves.

Bill and Nancy McComb serve at Dakar Academy in Dakar, Senegal, where they witness a healthy synergy between the surrounding Muslim community and the school. In one particular instance, a fire destroyed part of a shantytown neighborhood, and Dakar Academy rallied to provide for the affected families. Students and staff together provided supplies, gas bottles, food, clothing, and different shelter options.

“We did not just give practical help. Our Dakar Academy kids were praying with them, witnessing, and sharing the gospel,” the McCombs said. “The whole neighborhood sees that when our community hurts, Dakar Academy is there: going out with practical help, but doing it in the name of Jesus.”

At Faith Academy, the Quicks say the squatter community down the hill from the school receives free water from the campus, and the students are involved in soccer and other outreaches with these neighbors. The Quicks describe Faith as a central hub, connected to the countless ministries and opportunities in Manila. “It would definitely be a detriment if Faith Academy were not there,” they said.

With the influx of refugees into Germany, TCKs at Black Forest Academy—some who even speak Arabic—have stepped up to welcome the refugees to their community. Katrina says that many of Black Forest’s seniors have taken training courses for refugee ministry and many others bus down to the camps multiple times a week to build relationships with refugees. One of the dorms off of Black Forest’s main campus was even converted into refugee housing, and 20 people moved into the dorm in February.

The leaders of these schools say it’s already inherent in the students’ worldview and upbringing to serve each other and their surrounding communities; outreach is always very student-led and initiated.

“I think we have a big view of God,” said the McCombs (at Dakar Academy). “We know that God can heal, save, and deliver. We had seniors who would walk the streets and talk to the beggars. The spirit of God is really moving.”

International Christian schools are hardly “Christian bubbles,” as some might assume. On the contrary, schools like Dakar, Black Forest, and Faith Academy attract many non-Christian families for exactly what Christians want to be noticed for: excellence. Diplomats and international businesspeople often send their children to these schools, creating even more dynamic opportunities for students and staff alike. And many of the children end up believing in Jesus.

One successful business family sent their son to Black Forest because he had Asperger’s Syndrome, and Black Forest was the best school equipped with special needs resources. Katrina taught the son, and by the time he was ready for high school, he had transformed. He chose to be baptized in front of the whole school, which spoke volumes to the student’s family.

“From what I was seeing, it was like the whole family blossomed,” Katrina said.

Beyond witnessing to the non-Christian families in attendance, the TCK educators recognize the incredible honor it is to serve TCKs themselves.  “We call them bridge builders,” say the Quicks. “If you can go to a new country and learn what it’s like to live there and be able to make deep and lasting relationships…those kind of skills take a lifetime to develop. [TCKs] have that by the time they’re 18.”

The biggest advantage that I gained from growing up in Africa and particularly going to Ivory Coast Academy is the ease with which I can bridge between cultures. This skill has proven indispensable at every stage of my career. While I gained an understanding of the West African and U.S. cultures from my parents, it was really my time at boarding school that shaped my broader worldview on engaging and empathizing with different cultures. Our school had students from the Americas, Europe, Middle East, Asia, and Africa. We had different tastes in sports, music, food, and even different worship cultures. We all learned to recognize our own cultural distinctions while appreciating the distinctive aspects of other cultures. In my business career, that has allowed me to seamlessly move into new environments, organizations, and markets with great ease. It has allowed me to understand the needs of customers, employees, and business partners better than most of my peers. It has given me a high level of tolerance and patience when dealing with the unpredictability and chaos of working in emerging markets. In general, it has made me a more adaptable businessman who is equally at ease in every situation. From sitting down with heads of state to taking a meal with a rural shepherd under the African stars, I always feel confident that I can interpersonally connect and relate with anyone from anywhere.
– Philip Walton, COO of BRCK