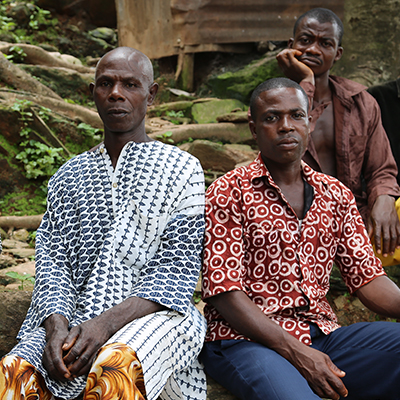 It was just a typical church service in the town of Keri, Ghana. All of a sudden, in the middle of a woman’s prayer to accept Jesus as her savior, another woman screamed and pointed to a four-foot-long snake dangling from the rafters above the pulpit. Panicked yells erupted from the congregation as men began throwing large sticks at the intruder, trying to knock it down. Then, after 30 chaotic seconds that felt like years, the snake was knocked to the ground and killed.

To those who were inside the church that day, the snake was more than just a reptile, and the timing was more than just coincidence. They were symbols of the spiritual battle that this small group of believers face every day. The darkness that envelops the people and area surrounding Keri is unbelievably strong, but slowly the light is starting to break through.

“The enemy doesn’t want them to come to him. He doesn’t,” said Lloyd Chinn, who served among the Akyode before becoming an International Ministry Director. “This was just a visual manifestation of the war that we’re in with these people.”

After traveling for an hour by motorcycle through the bottom of the valley, the road ends and the footpath begins. Another hour goes by, hiking up a steep and slippery route that is cut through the suffocating jungle landscape. Then without warning, at the top of a rocky stairway, the village of Shiare comes into view. Despite having electricity (something that puts it ahead of significant portions of rural Africa) walking through Shiare is like stepping back in time. A palpable darkness also hovers over the village, and one must be careful not to trip over small altars stained purple from animal sacrifice. In front of many of the houses, chickens have a string tied to them in preparation for sacrifice.

This is where the Akyode people call home.

A (Dark) City Upon a Hill

The Akyode people (pronounced Ah-Cho-Day) reside in the mideast section of Ghana, bordering Togo. With a population of 14,000, this people group speaks Gikyode as its main language. They are farmers primarily—spending their days cultivating yam and cassava, as well as plantain, bananas, and pineapples in the mountain regions. Mostly an amicable group of families and communities, sometimes they become hostile to outsiders—at least, until they prove trustworthy.

The Akyode are also one of the strongest Animist people groups in West Africa, with 93 percent of the population claiming to be adherents of their ethnic religion. Less than 60 people in the entire population have accepted the gospel.

The spiritual practice of fetish priests involves mediating between the gods and the people. The priests perform their work secretly in a fetish shrine—usually in a mud hut. They perform animal, liquor, and money sacrifices to these gods. Sometimes, worship rituals involve trokosi: virgin women given to the priests for an undesignated amount of time to pay for crimes committed by their families.

“The powers are real,” said Lloyd and Jan Chinn. “They’ve got to cower to these gods.”

The supreme god among the Akyode is Brukum, whose seat of power is in Shiare. Political and spiritual rulers from all over West Africa trek up to Shiare so that Brukum can grant them the power they perceive he wields.

For Chris and Dana Holloway, WorldVenture missionaries in Ghana, getting to know the inhabitants of Shiare has been hard enough, let alone sharing the gospel with them. In addition, the introduction of technology (through electricity that came a few years ago) has deeply threatened the worship of Brukum, something the Akyode elders desire to uphold in Shiare. The introduction of western culture through TV, cell phones, and connection to the outside world has threatened the town. Because of this, the elders only allow uneducated people into the cult of Brukum.

Despite the often-cold reception WorldVenture missionaries and their teams receive in Shiare, the Chinns and the Holloways have built a foundation of relationships over the many years they have journeyed to Shiare and other Akyode villages. Thanks to a cohort of Wycliffe missionaries who recently moved out of Shiare, the Akyode have most of the Bible in their own language; now it’s just a matter of getting them to read it. In 2009, the Akyode elders allowed the Holloways to share “The Jesus Film” in Shiare, but nothing came out of it. However, that hasn’t stopped Christians from visiting Shiare on a regular basis, continuing to share “The Jesus Film” and building relationships with the Akyode people.

The Holloways are finding other ways to show the people they care, too. After being asked what their village’s greatest needs were, the chief and elders came together and said a community health clinic, improvements to the road leading to town, and better public toilets. With these requests in mind, WorldVenture is now working to put together focused short-term teams for 2016, in order to visit Shiare and begin helping with these expressed needs.

The Holloways also sensed the need to start discipling the people of Shiare, in addition to showing “The Jesus film.” Two believers, Sampson and Augustine, who both grew up in Shiare, now journey up the mountain every Thursday to share knowledge of the Bible and Jesus with the Akyode.

One of the biggest obstacles the Holloways have to overcome in bringing the gospel is the racial barriers that exist between them and the Akyode. One example: a man in another Akyode village asked Chris to meet with him to talk about Jesus and learn about the Bible. As they were going through the history of the Bible, Chris explained how both of them were equal in the eyes of God.

The man’s eyes grew wide as the truth hit him. “All my life I’ve been told that the white man is closer to God, and now you’re telling me we’re on the same level.”

Chris thinks the colonialism of Ghana by the British instilled in the Akyode a deeply held assumption that they are inferior to white people. Chris and Dana, in their passion for sharing Christ with these people, are getting one step closer when they share the Biblical truth of equality with these people.

This past fall, a small group of WorldVenture workers, including Lloyd Chinn, trekked up the valley to visit Shiare. Drenched from the heat and humidity, they sat with the council of elders in the middle of the village to share in the mourning of the death of the village chief one month prior. Lloyd had spent 15 years building a relationship with this man. Wandering past the huts that only fetish priests can enter, they made their way to the home of the chief’s widow.

Lloyd entered and sat with her for a moment, and offered his condolences through silence, as is the custom. When he emerged, tears were streaming from his eyes, as he knew the man had died without ever knowing Christ. He stood silently for a while before speaking softly to the assembled group. “You know, eternity is not something to take lightly.”

Ways To Get Involved

We need people to assist in reaching the Akyode people ASAP. ESL teachers, nurses, doctors, translators, linguists, and those with a passion for making disciples are all needed. Could you see yourself working among the Akyode?

Pray that five families will join WorldVenture and go spread the gospel to the Akyode people. Pray that the people in and around Shiare would grow in their desire to find the truth that will set them free from Animism.

If you feel called to give financially, please contact WorldVenture. Resources are needed to improve the road from Nkwanta to Shiare, and to construct new public toilets in central locations around the village.