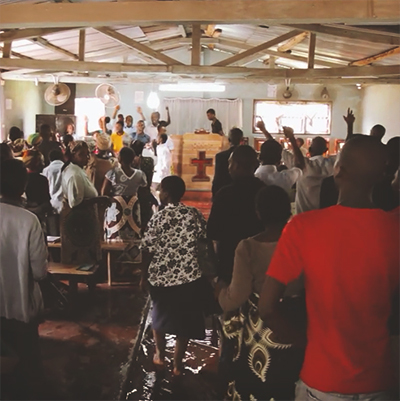 The ‘Musical Midwife’ of Mozambique

Megan Meyers sat in a room full of musicians in Beira, Mozambique. For 20 minutes, they were arguing about how to rhythmically begin a song they are playing together. Moments before, Megan could distinctly hear discordant notes being played by these musicians, who had carried on like everything was in harmony. And yet, try as she might, she could not hear the distinction between the two separate rhythms these Mozambicans were hotly debating.

For ethnomusicologists like Megan, understanding that musical training is culturally specific is a no-brainer. The sub-Saharan African music Megan has been studying for the last five years is of a cyclical nature; songs don’t have the western structure of verses and choruses (or a beginning or an end), but they end when it’s the right time to end. In addition, as Megan witnessed first-hand, this kind of music tends to sacrifice tone for rhythm.

“Tonality is flexible, but rhythm is king. And it needs to be rhythm you can dance to,” she says.

This makes Megan’s job all the more interesting, as she is specifically concerned with contextual worship arts in Mozambique. The WorldVenture missionary is a unique ethnomusicologist, as she is more interested in applying her studies for results, rather than simply observing the culture and music. “You don’t just worship from your neck up,” she says. “You worship with all of who you are—you move to the music, and you understand it better when you learn to move with it.”[quote_right]“I’m kind of like the musical midwife; they’re the ones birthing the songs, and I’m just coming along saying ‘Push!’”[/quote_right]

“The goat must graze where it is tied” was a popular slogan made famous by Mozambique’s first elected president. While he was referring to government corruption, Megan has used it to describe her efforts of promoting religious hymnody in the country. A wife to a medical doctor and mother of four young girls, Megan finds it a challenging yet fortunate task to be able to pursue doctorate studies on the mission field.

The title of her doctoral dissertation through Fuller Theological Seminary is “Grazing and Growing: Developing Church Ministry and Mission Through Contextualized Worship Arts in Mozambique.” In her studies, Megan tries to answer two big questions: 1) whether contextualized worship arts really impact church ministry and mission, and 2) how the capacity can be built for Christian ethnomusicologists to maximize their mission work.

[quote_left]“If I need to put aside my anthropological agenda to preserve traditional music for a time, I have to do that, if people are actually engaged.”[/quote_left]How does she do that? Once a month, she gathers worship leaders and musicians to a composer’s club. For three hours, these musicians pray together and study the Scriptures. Megan picks a biblical topic to write a song about, such as peace or communion. The group then studies what the Bible has to say about those topics, breaking into groups to write. Gradually, Megan will listen to a little melody here, a little laughter there, and suddenly, the groups are spreading farther apart as the excitement and energy builds. “It’s really exciting to watch,” says Megan.

The products made by these musicians are always diverse in musical styles, from reggae to ‘80s rock pop and a hint of traditional Mozambican music. However, what Megan has found to be most helpful is how the songs always reflect a truer Gospel message than what these leaders had been playing before.

“I learned what people really believe through what they sing, and they’re singing an incomplete Gospel. Discipleship is not a key value in Mozambican evangelical churches yet,” she said.

Through these workshops, however, Megan has witnessed how these musicians have realized the need for their songs to be true and instructive. “Music is such a powerful, powerful means of teaching, of receiving healing and transformation, and a means of real growth for ministry and for mission,” says Megan.

Realizing that American Christians bicker about worship styles is not earth shattering, and it’s no different in Mozambique, says Megan. The older generation still prefers the structured hymns introduced to them by colonial-era missionaries, while the younger generation adores the current Jesus pop culture imported from the west. Most of their songs are imported, a fact that bothers Megan, whose desire is to see Mozambicans embrace what it means to be Mozambican and Christian.

And so, Megan dresses in traditional African clothes. She learns to play their instruments, such as the thumb piano. She dances. And bit by bit, the freedom she exhibits gives the Mozambicans permission to enjoy different styles as well.

“For the old people, it’s realizing that playing on a drum is not going to call the devil,” she says. “For the younger people, it’s reenergizing it, invigorating it with a relevant appeal.”

The danger, she says, is in imposing another musical colonialism on the younger Mozambicans, who view their traditional music as old and uninteresting. The power dynamics are complicated and fragile, but Megan has learned to prioritize what’s important.

“If I need to put aside my anthropological agenda to preserve traditional music for a time, I have to do that, if people are actually engaged,” she says.

That’s why she’s approached the song-writing workshops with a mind to blend musical styles, instead of trading one for another. For example, at one conference where 90 medical students gathered together, the worship team consisted of traditional western instruments, except the drum kit included traditional Mozambican drums.

“It’s this interesting blend of traditional and contemporary,” said Megan. “I would love to see more of that innovation, and creativity, and embracing of the old and the new. And it’s coming, but it’s slow.”

What Megan has found most effective in running the composer’s clubs: the mentoring relationships. Rather than making music herself, Megan provides the space and means necessary for Mozambicans to express their faith and their cultures through song. “It’s them that really make the music their own,” she says. “I’m kind of like the musical midwife; they’re the ones birthing the songs, and I’m just coming along saying ‘Push!’”

The music clubs have become so foundational to the worship leaders of these different churches that the pastors have told Megan they’ll keep coming to them, even if she no longer organizes them. In addition, one church sent three missionaries out after the church began to focus on creating and singing more missions-minded music.

Megan has also started teaching various courses at seminaries in Beira, including worship and vocal technique. She makes worship a tangible missional experience for her young musicians. Every week, they go to a bus stop, hospital, or some culture center to sing, pray, and talk with people walking by. Recently, the group of people grew to approximately 30, and the patients in the hospital heard the music, creating a special time of connecting with people who were hurting.

One of Megan’s participants in the music evangelism project, Sergio, realized something during these worship ventures. He told Megan, “I know we’re supposed to share our faith. As a musician, I finally realized I can share my faith through song.”

The Mozambicans may never fully return to their traditional drums, or exchange their favorite Hillsong or Michael W. Smith songs for their own heart music. But Megan knows her efforts to create contextual worship are transforming the hearts and minds of Mozambican musicians, one drumbeat at a time.