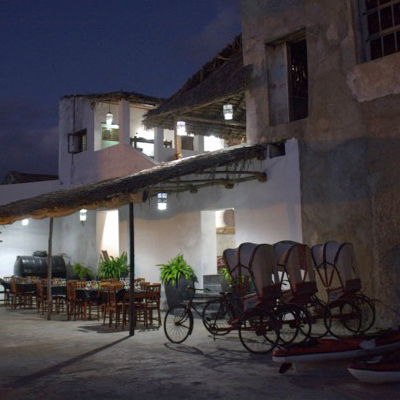 People who see Rodger and Lynne Schmidt doing ministry on the island of Mozambique don’t understand this side of their life. They see the couple and their two sons enjoying a resort island, with blue ocean water, palm trees, and pristine beaches. “Must be rough,” family friends will say.

Living on the Ilha de Moçambique, WorldVenture missionary Rodger Schmidt has put locals in jail for stealing. He requires all members of his security team to pay for any equipment that gets stolen, even if they aren’t on duty. While seemingly strict, the crosspollination of this accountability works, Rodger says, although he’s been obligated to fire half of his employees at one time or another.

The island is quickly becoming one of Mozambique’s top 10 tourist destinations for its combination of beauty and history. In July, the Schmidts are opening phase 1 of their dream business: a 10-suite hotel, bakery, and restaurant. The 150-year-old Portuguese building boasts beachfront property, with an adjacent garden, gazebos, and porch swings, all overlooking the ocean.

And yet, the island’s own history is more complicated than the peaceful landscape would suggest. Only three kilometers long, it used to be the point of contact for the 400-year Portuguese occupation of the land, of which Stone Town (on the northern end of the island) was the capital city of Portuguese East Africa. Slaves hauled stones on their backs to build this early settlement. The birthplace of Islam for Mozambique, the island was also a thriving trading post for slaves, gold, and spices for the Portuguese on their way to India, and a major Arab port as well. It boasts many significant cultural sites, including the Chapel of Nossa Senhora de Baluarte, considered the oldest European building in the southern hemisphere. The Schmidts say 14 sunken ships rest in the waters nearby, and broken pieces of pottery from the Ming Dynasty will still wash up on the island’s shores.

“It’s amazing in this little tiny corner of the world, all that went on here,” the Schmidts said. “It’s a very unique place to come visit, and the waters are breathtakingly beautiful.”

But looking underneath the surface, the years of colonialism have left a shadow on the island and its 14,000 residents. A slave tunnel still exists where slaves would walk from the prison to the stone quarry before boarding ships that would take them away forever.

“Historically, the Arabs, Portuguese and all wealthy foreigners provided for them in every way because that is how it was done,” said Rodger. “They also told them where to stand, sit, what to eat, kept them illiterate and shut off from the outside world, beat them and kept them poor to control them.”

Rodger’s and Lynne’s desire is to write a new history for the island through business. Even more than that, they seek to use business side-by-side with transformational leadership training among the Makua people. In one instance, Rodger’s security guards caught one of their co-workers stealing. Instead of sending the young man to jail and ruining his employment opportunities, Rodger fired the employee, saying he could volunteer for three months, with an evaluation at the end of that time. The young man, although publicly disciplined in front of his co-workers, still wanted to come to the weekly teachings Rodger does with his employees. Rodger’s teaching was getting through to him.

Rodger teaches his 12 employees in his own home on whatever topics the young people want to hear, ranging from business advice to relationship advice, all using biblical principles. The group knows that while Rodger and Lynne treat them seriously as employees, they also love them like their own sons. Rodger will wrestle with them. Lynne will invite their wives, mothers, and girlfriends over to paint nails. While the teaching times are never explicitly evangelistic, two employees have come to know Christ.

One of these men used to be a devout Muslim, and a “thug,” according to the Schmidts. Rodger had known him for nine years, but he started noticing the young man never went to the mosque. When Rodger asked him about it, the young man at first said he didn’t have time. “But you have time to come to our teachings,” rebutted Rodger. “How can you have time for that and you don’t have time for the mosque?” “Well, things are changing,” replied the Makua employee.

Two weeks later, he made publicly professed his faith in Jesus.

Development of a Community

Beyond transforming their own employees, the Schmidts desire to transform the entire Makua community on the island. They live on the southern end of the island, although their hotel property is on the north, because that’s where the islanders live. They participate in local food fairs. They hosted a local marathon as a fundraiser for beach cleanup in the fall. Because they are local business owners, they’ve gained influence and a good reputation among the rest of the business community, many of them influential Muslims.

Rodger and Lynne have always had a desire to work in the hospitality industry, and the booming tourism industry on the island offered the perfect outlet for their early passions. Not only will their business serve local and national markets, but also the international visitors coming from mainland China, Dubai, and Europe.

The name of the Schmidts’ business is Rickshaws, and it’s significant. Early on in the island’s history, slaves used to transport foreign and local dignitaries by rickshaw. Now, the Schmidts’ hotel will also offer clients their own rickshaw, but this time by employing local people riding bicycles, thus giving them dignity and redeeming a part of the island’s history.

“God created all humans for meaningful work,” said Rodger. “When there’s meaningful work in the lives of human beings, something spiritual happens to where we are awakened and more receptive to spiritual questions and discussion.”