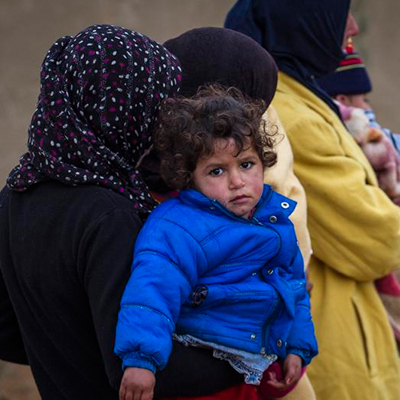 What It’s Like To Live Among Refugees in Lebanon

Ramia looked wistfully at the olive tree giving us shade from the hot sun. “Our house was beautiful! We had a garden and every evening we would sit outside, drink coffee, and talk while the children played. We even had our own olive trees just like these!” Ramia was forced to flee her village with her two small kids because Daesh (ISIS) was closing in. Her in-laws were too old to travel, so they had to leave them behind. Daesh took over her village and set up a communications center in her apartment building, which was then targeted by the regime. She then heard the news from some young men who stayed back that her home had been destroyed. She still does not know the fate of her extended family.

Ramia is just one of the more than 1.3 million refugees who have fled to Lebanon since the war started almost five years ago. Lebanon is now the country with the most refugees per capita in the world. To put it in perspective, one out of every four people in Lebanon is a refugee.

Even the famed Arab hospitality has its limits, even though the Lebanese are well known for it. The Syrian army occupied Lebanon for nearly 30 years, having only left 10 years ago. You can imagine that the general population didn’t welcome their former oppressors with open arms. When a Syrian child was beaten by a Dunkin’ Donuts employee for begging from his customers, the Internet was full of people defending the employee, because after all, the child was a Syrian and “over 30 years they r (sic) stepping on us” so of course any Lebanese would have earned the right to hurt him.

“As a result of the Church reaching out to those in need, we now have approximately 100 discovery Bible studies meeting weekly, most of them now being led by new Syrian believers. Nearly every week, a refugee makes a decision to follow Christ.”[/quote_left]Imagine the trauma of being forced to flee your home because your only other option is death. Fathers are stressed trying to provide for their families in a country where they are not legally allowed to work. Mothers are barely surviving the day-to-day demands of life as refugees, and children live in fear of police sirens, completely losing it at the sound of fireworks. One refugee came home to the apartment she was renting for an exorbitant price to find the locks changed and all her belongings on the front step. Her landlord would only let her back in if she gave him her daughter. Read that again. Her landlord wanted her to give him her child so that she could stay in the apartment she had already paid for. So added to the trauma of escaping bombs is the discrimination and violence committed against families who only want to live in peace. There are literally a million people at our doorstep, begging for help.

And the Church, oh the Church has stepped up in an incredible way. The church we are involved in is just one of many ministering to refugees who have escaped from both Syria and Iraq. We are currently serving more than 1500 families. The first step is to provide for basic needs: food, clothing, milk, diapers, mattresses, and blankets. Many refugees show immense gratitude and contentment for just that, but others can’t help but wonder why the Church is so generous in helping. “No one has ever done what you are doing for us,” one mom told me. What a joy to tell her that it’s because of the love of Jesus that we pour into her and her children. As a result of the Church reaching out to those in need, we now have approximately 100 discovery Bible studies meeting weekly, most of them now being led by new Syrian believers. Nearly every week, a refugee makes a decision to follow Christ.

Even those who haven’t made a decision about who Jesus is recognize that something different is going on. One mother of five, who attends our weekly music class for young children, has started to bring her friends to class just so that we can pray for them. She’s seen the power of prayer in her own life and wants others to experience it as well. As I held tightly the hands of a woman she brought to me, I couldn’t help but cry with her as she shared her story. Her husband had tried to travel to Germany and it had been several months since she heard any news from him. He was supposed to get to a safe place, then send for his wife and as many of their 10 children that she could bring along. But she was losing hope. Her friend dabbed at her tears with the corner of her veil, comforting her with these words: “Don’t worry! They will pray for you here!”

There are many organizations and NGOs who are also trying to mitigate some of the suffering the refugees experience here in Lebanon. They collect and pass around winter coats and blankets to those in the direst circumstances. But the Church is offering more, much more than just a warm place to sleep.

As she flipped her bright blue hijab over her shoulder, a young mother and new believer who is now leading her own Bible study group told me, “The church accepted me just as I was. They didn’t ask if I was with Daesh, with someone else, anything. They welcomed me, helped me just as I was. Because they love the Lord, they did this. I can see it (the love for God)… All I knew before coming here was that Jesus was the son of Mary. That’s it. Now I’ve become a believer. He’s saved me.”

War is never a good thing. We pray for the war in Syria to stop; we pray for peace. But we also recognize the incredible opportunity that we, the Church, have to practice the pure and undefiled religion that James talks about in his epistle. To feed and clothe a refugee: that is the very essence of our faith.

Nicolette Hutcherson is a WorldVenture missionary living in Beirut, where she works with Safe Haven Home for Girls, a place for abused and disadvantaged girls. Her husband, Caleb, teaches at the Arab Baptist Theological Seminary, which was the subject of one of WorldVenture’s cover stories.

The Hutchersons are just one of many WorldVenture missionaries who’ve witnessed the marvelous ways the Church has reached out to vulnerable Syrian refugees.