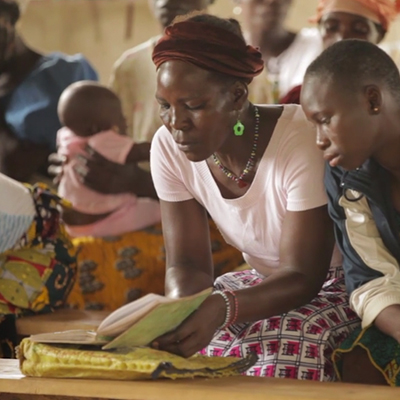 Why Does Bible Translation Take So Long?

(Editor’s note: Linnea Boese is a Hebrew exegete who has lived in Côte d’Ivoire since the 1980s. Her ministry has involved translating the Bible into Nyarafolo, a previously unwritten language.)

Fatou had dealt with a chronic leg ulcer for many years, and it had not responded to any indigenous treatments in Cote d’Ivoire. When she came to Christ, she started reading the Nyarafolo translations of the Bible. We had just printed Psalms 1-41, and as she read them aloud to family and friends, they were thrilled to see the encouragement she was finding in them. Fatou could read French, but it was the Nyarafolo translation that spoke to her and to her listeners most powerfully. After Fatou died from bone cancer, she left a legacy of hunger for literacy and God’s word that continued to influence her community.

Salimata, director of a widows’ co-operative, came asking for a Nyarafolo translation of the Lord’s prayer. When she read it in Matthew, she was overwhelmed by a sudden understanding of the phrase “Hallowed be your name,” which had always confused her. Now she realized that all people are to reverence God’s name – and decided to teach the prayer to her fellow widows.

Pastor Pekaly was preaching on Galatians 1:6-10. As he was reading it aloud, he stopped to comment on how great it is to have the text in Nyarafolo. It was so easy to understand and because of the translation, the church can better avoid being led astray by false teaching. He then asked God’s blessing on the translation team.

It’s true: there is nothing like hearing the Bible in your heart language.

My team and I have been involved with the Nyarafolo Translation Project for more than 20 years, and we’ve only partially accomplished the job of putting God’s word into this language. In contexts where there is an established church, a written language, and a pool of educated mother-tongue speakers, faster approaches may work. For example, Wycliffe Associates has begun a method that results in the whole New Testament being translated in just two weeks. Mission Frontiers has noted a shift in Bible translation that’s happening in the digital age, making the process more efficient. The basic elements need to be in place for pulling together a large group of multi-lingual speakers familiar with the Bible and able to write translation drafts, working simultaneously with help from translation consultants. But here in Cote d’Ivoire, it is via “ant work” that we see the end goal taking shape.[quote_right]When unbelievers hear the Bible, they are captivated, both by the message and the joy of knowing their language is written and “real.”[/quote_right]

There were only about 35 Nyarafolo believers in this least-evangelized people group in northern Côte d’Ivoire when Glenn and I arrived in 1979. None of them were highly educated and there were no pastors who spoke Nyarafolo, an unwritten language. Glenn moved on to other aspects of ministry after our first year in language learning; I could not resist the pull to figure out how this complex language works. The alphabet and basic grammar needed to be determined in order to begin providing any materials for ministry, and it became evident that we needed to translate the Bible.

As our Nyarafolo friends started coming to know Jesus, their Bible teachers struggled to figure out how to express key terms like altar, disciple, gospel, and prophecy. Most villagers are monolingual, so borrowing from French (the language of the government) or the trade language did not work well.

To make a very long story short, we formed a team that is forging ahead to accomplish this task. In the ‘80s and ‘90s (with the help of David and Karen DeGraaf, Wycliffe, for nine years), we finished the basic linguistic work and published literacy materials. (Karen and I, both moms, were part-time.) We drafted the Gospel of Mark, then sent our translator-in-training, Abdoulaye Ouattara, to seminary. A decade of civil unrest and evacuation followed, along with several injuries to translation team members.

But in all these things we saw the Lord shaping us into a productive team. We now have Abdoulaye doing New Testament translation, and Moïse Kone working with me (the Hebrew exegete) in the Old Testament. We aim to have the New Testament, Pentateuch and Psalms ready to be sent off for printing by the time Glenn and I retire in 2018. And Abdoulaye wants to finish the Old Testament after that.

Other team members teach people to read (only about 10 percent are even literate in French), and prepare our texts for checking. The consultants we work with don’t speak Nyarafolo, so we must provide a written back-translation in French. Often that very process reveals a confused Nyarafolo rendering. And no matter how good we think our work has been, consultants always find things we need to improve.

They probe to discover how imagery is understood, to whom pronouns refer, and whether words really express the original language’s meaning. Every verse is checked and we make revisions.

When we’re figuring out how to translate key biblical terms, team members don’t always agree. Backgrounds matter: their dialects, their family’s religion, and their education. So we also heavily rely on our reviewers (pastors and educated laypeople) and on our support group from area churches for feedback. We also take our texts out to the community to test them. When unbelievers hear the Bible, they are captivated, both by the message and the joy of knowing their language is written and “real.”

And testing truly helps us to evaluate our solutions. For example, we decided to try a Nyarafolo word for “covenant” that has roots in traditional religion, where people initiate contracts with the gods of various territories. What would be the reaction of Christians? Muslims? Traditionalists? The result: they finally understood how awesome it is that it was the supreme God who initiated his covenants with humans, that he is not distant and unconcerned.

As Scripture portions become available, believers are more easily expressing key concepts. Instead of stumbling over “the Eternal One” (the French name for LORD, YHWH), they now say Yewe, which means “the One Who Is.” Instead of a borrowed expression for “God bless you,” they say “May God put his good hand on you” (a traditional expression that is being brought to new life). Passover used to be expressed by the French term, Pâques, which meant nothing to Nyarafolos; now the word is literally “pass by and spare it.” The protection from death becomes evident.

Bible translation does seem to take forever. Our days are filled with details, constant research and revisions. Is all of this worth it? We believe so, or we wouldn’t have the perseverance to keep going. God’s Word is his inspired message to us, and we have to do our best to make that message clear and without error.

Common Language – The Nyarafolo Translation from Drew Hayes on Vimeo.