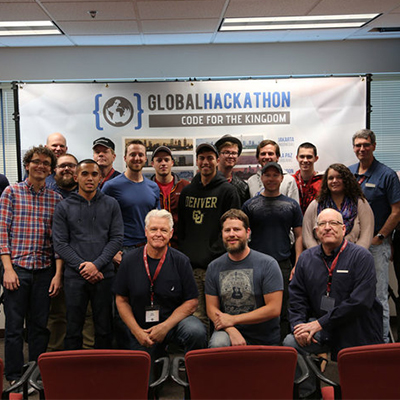 Led by Chris Wynn, director of Communications at WorldVenture, and organized by Chazz Wolfe, growth hacker at WorldVenture, the event happened in conjunction with Code for the Kingdom’s global hackathon, with 12 locations all over the world, including in Indonesia, London, and La Paz, Bolivia. WorldVenture missionary Jason Quick attended the hackathon in Manila.

Over the course of long hours and many, many red bulls, the Rocky Mountain hackathon produced six projects, all with the intent of utilizing tech tools and talent to further the gospel.

Here are the winning projects:

“Is it possible to create an app that would provide believers with a daily reminder to bless, believe, and belong?”

This question fueled a group of designers and developers to create InStep, an app that would help Christians look upward, inward, and then outward.

“We wanted this to be really simple and really actionable,” said Tim Kleier, developer for the app. The app starts with an upward focus with a spiritual quote or prayer, then moves to the inward portion where a YouVersion database generates verses for an inward response. Both upward and inward portions give the option to write a response or otherwise reflect, and a progress circle shows how much the user has gone through these responses. The last section, outward, allows the user to do any number of things as an expression of what he or she has internalized from the verses and inward reflection; for example, the app is linked to SMS to text someone for forgiveness. The app then has reward emblems for how much the user has accomplished through the app.

“It’s basically an app that tries to make following God as easy and simple as possible and rewards people for doing it consistently,” said Garrett Campagna, a designer and developer on the project.

Joshua Kruegger remembers when, as a teenager, he diligently saved $100 for the charity of his choice. When he went online to finally give the money, he distinctly remembers the feeling after clicking the “give” button. He felt let down, like he should have enjoyed it more.

That experience has sparked Josh’s project of making philanthropy more joyful. GlassHalf’s purpose as a website is “to give passionate people an engaging opportunity to change the world every day,” and it basically does this by wedding philanthropy with competitive gaming. Imagine giving to World Vision through an online slot machine game, or challenging another giver to a game of poker before donating to the Salvation Army, and that’s Josh’s site.

Taking on the challenge that put forth to all hackathon locations of “How does the Bible speak to us today?” this group of developers came up with the idea of digesting daily news through a clear biblical filter.

Using Amazon’s Alexa voice dictation, Relaverse reads a news story or headline, then reads a relevant Bible verse directly after it. When reading a story about a kidnapped missionary, Alexa will read 1 Peter 3:14: “But even if you suffer for doing what is right, God will reward you for it. So don’t worry or be afraid of their threats.”

The group scraped newsfeeds for certain topics, and worked with a database of keyworded scripture verses to create pairings of news and contextual, meaningful verses. In the future, the group hopes to make a more intelligent and personalized algorithm, and to integrate a social side of the project.

“What’s really cool about an even like this is all the developers here are just really encouraging,” said Sam Stanton, a CU Denver student who worked on Relaverse. “It’s competitive and it’s fun, but at the end of the day we’re all here to serve God and to build something great together.”