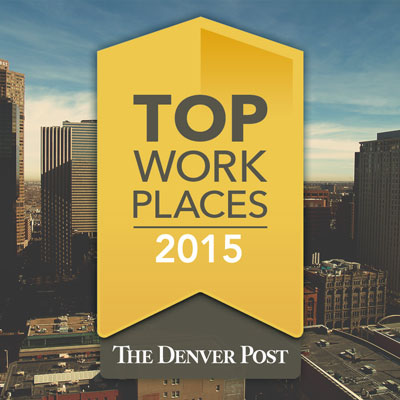 LITTLETON, Colo., Apr 13, 2015 – WorldVenture is pleased to announce its ranking in the Denver area’s 2015 100 Top Workplaces Survey published by The Denver Post. This is the first year WorldVenture has received a ranking, placing 15th out of 40 organizations in the small business category (fewer than 150 local employees). In addition to making the list, WorldVenture also received a Top Workplace Special Award in Meaningfulness.

WorldVenture’s leadership and human resources team attended a gala held by the Denver Post on April 7. The Denver Post published an article featuring WorldVenture on April 12, along with the full list of other organizations that made the list.

Also published was a selected comment from a WorldVenture employee concerning WorldVenture’s meaningfulness: “Our work is entirely focused on one thing: telling the whole world about Jesus. As a Christian, there is nothing more meaningful than being able to have missions at the center of your work, whatever that looks like.”

Last fall, Workplace Dynamics, LLC, a surveyor of businesses, conducted the survey of 42,923 Colorado employees in 219 companies to see who would make the fourth annual Top Workplaces list published by The Denver Post. This year, WorldVenture was the only faith-based organization to appear on the list.