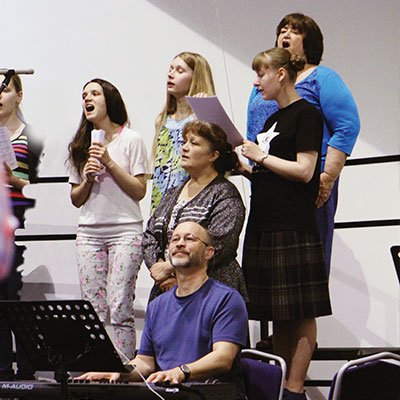 The Art of Worship in Today’s Russia

Underground in Moscow’s metro stations, the ornate chandeliers, gilded paintings and arched columns don’t make sense. The beauty and artistry in these stations belong in an art museum or a palace, not hidden beneath the earth where they go unnoticed by hurried commuters. And yet, it does seem to fit. After all, this level of grandeur seems appropriate for any part of the city that gave the world Pushkin, Dostoevsky, and Tolstoy.

Above ground, the colorful, cartoonish spires of Saint Basil’s Cathedral arise almost playfully across from the intimidating walls of the Kremlin. Nearby, Vladimir Lenin’s mausoleum does not let visitors get too comfortable. And in the suburbs surrounding Moscow, beauty is hard to find, as grey Soviet-era apartments—file cabinets for people, as one traveler observed—speckle the flat landscape.

In the midst of these contrasting values of a complicated country, Lenin’s words still echo in the Russian consciousness, as artists wrestle with the past and the future:

“Every artist, everyone who considers himself an artist, has the right to create freely according to his ideal, independently of everything. However, we are Communists and we must not stand with folded hands and let chaos develop as it pleases. We must systemically guide this process and form its result.”

Recovering from decades of state-sanctioned music labels and other forms of artistic censorship has not been easy, especially since the fall of the Soviet Union brought in a rush of Western media and art. Russians happily consumed what they had been denied for so long, which in turn stifled their own desires and inspiration to create.

But even as Russia seeks to suppress opportunities for its citizens to hear about the Creator with its recent anti-evangelism laws, glimmers of hope exist.

Nastya is a Russian woman who grew up in Uzbekistan. She is quiet but quick to smile, often found with her short spiky blonde head bent over a guitar as she strums a soft melody in a Baptist church outside Moscow. A gifted singer, Nastya is part of the Moscow Worship Band, where she wrote the song “We Are Waiting for You.”

“I think people—especially maybe here in Moscow—are always waiting for a better life,” she said. “We want bad things to go away; we are waiting for something new…but sometimes, we are so deep into that waiting that we forget about waiting for God. And this song is about how to live your life so that you are always ready for Christ to come.”

Andrey, another Russian musician, wrote a song called “From the Deep” on that same album. Andrey is jovial, but a commanding worship leader with a pure and distinct voice. When Andrey and Nastya harmonize during a mournful, minor chorus on the album, it communicates truths about God in a way only music can.

“The music and lyrics produced the right emotions in us: joy, gratitude, and repentance,” said Andrey. “We wanted to bring that to other people.”

Nastya and Andrey are just two Russian worship artists WorldVenture missionaries Gerry and Marla Schroeder have mentored over the past 12 years in the country. With extensive backgrounds of serving churches through their music, drama, and tech experience, God led the Schroeders to help the talented Russian people develop in these areas as well.

The Russian music style—reflective of their country’s conflicted past—is more mournful, say Marla and Gerry; Russian music explores many different modes of minor keys, resulting in refreshing melodic lines. The simple, four-chord structure of western music—many times written in major, more joyful keys—does not always work as effectively for the Russian people. As the Schroeders partner with these young artists, they understand the importance of preserving this musical identity.

“We want to really maintain the chord structures that resonate with the Russian soul: these different modes of minor variations that they use, which is really the way they communicate their hearts from their childhood,” they said.

For Andrey, the issue of Russians writing Russian worship songs is complicated. Part of the problem exists because as Western music flooded into the country, they started translating those worship songs into Russian. While Gerry and Marla lead a strong translation team to make sure the translation process is excellent and consistent, other translations do not entirely capture the deeper meaning of the songs. Still, many Western worship songs are popular among Russian Christians, and it’s hard to refrain from singing some of the bigger hits.

“But when we compare even the best translated songs with the songs that are original in Russian, there is a difference,” said Andrey. “There is something that speaks to the hearts of people in the songs that originate here, both in the language of songs and in the themes.”

Every year, the Schroeders organize and host the Soli Deo Gloria worship conference, where they fly in renowned songwriters to teach workshops, while also hosting a songwriting contest.

“We know our churches,” said Nastya. “We know what our churches need, so we can emphasize some particular things that connect to our churches to inspire our own people to worship God.’

These efforts to encourage Russian artists to express worship in their own way are working. The Schroeders created a publishing platform so that Russian songs could be gathered, distributed, and translated in one place, all under U.S. copyright law. Already, publishers from all over the world are contacting the Schroeders about translations and songs from Russia. The Schroeders hope to start a music label in the future.

It’s difficult to measure the broad influence this type of work is having within Russia. At least two of the Schroeders’ close partners are leaders in organizations with thousands of Russian churches. But perhaps influence is something better measured up close, from those who have worked with the Schroeders.

“I saw their dedication,” said Nastya. “I saw the passion in them about worshipping, about helping musicians. They care about us as musicians and Christians very much. They give us opportunities to grow.”

“It’s a very important point in Russia that if someone is considered to be a mentor, they’re not just wise or more experienced but they are supposed to be your friend,” said Andrey. “Gerry and Marla they have been doing exactly that. They have been investing their time and efforts in me and in other leaders in Russia, and they spent years and years just building the right relationship so they could really influence us for good.”