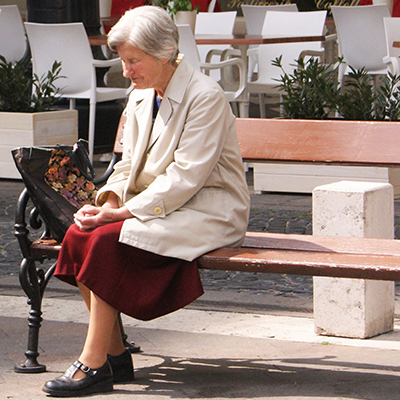 A Prayer for the Sake of Prayer

I’ve been reflecting on the role of prayer in missions, specifically in the life of a missionary. I’m appointed with WorldVenture to serve in Spain and greater Europe. As part of my preparation process, I traveled Europe this summer with a media internship led by WorldVenture Communications Director Chris Wynn. We’re a team of writers, photographers, and filmmakers producing advocacy media for missionaries in seven countries.

Yes, we’re media creatives and creating media is what we do best. But Chris challenged us to broaden our view of what the trip could be. He discipled us along the way not only in our professional skills but also our faith. He wanted us to use the opportunity to learn and practice expressing our faith in every area of our lives, no matter in which country we happen to be.

As part of our discipleship, Chris asked if praying three hours a day–every day–would be too much. Did we think that was unreasonable? Yet many missionaries report a large portion of their daily schedule is spent in prayer. They see God most active and creative when they have a regular habit of prayer. This idea mulled in my mind as our team visited missionaries, learned about their ministries, and helped them share God’s work.

Before we came to Europe, our team met on a weekly basis to pray over the trip. We prayed for God’s guidance and wisdom in our media projects. We prayed for his blessing on the missionaries, ministries, and countries we would visit. We prayed for protection and safety as we traveled. We prayed for the people we had yet to meet, the ones God would show us and who need to hear the gospel, perhaps for the first time.

After the first few weeks on our trip, I noticed what we had prayed for was actually happening. We were seeing God respond. In healing from illnesses that knocked us out and then disappeared. In resolutions to frustrating travel setbacks such as canceled flights. In evading Istanbul terrorist attacks by just a few days. In rare Christ-centered conversations with unreached peoples.

In Turkey, we were challenged by the prayer calls we heard five times a day. The mosques would create a surround stereo effect in some places. I woke a few times in the early morning, when it was still dark, to the sound of a lonely voice singing to Allah.

One night, a teammate asked how we Christians could not be as dedicated to prayer as the callers were. She asked what would happen if we prayed five times a day over the city of Istanbul. Would false religion and evil spiritual forces have as great a grip on the city? Could we counteract the lies being declared like a ceaseless spell cast on the people? A few of us agreed to conduct an “experiment” in praying at every call for a week. We set our alarms, woke up for the first, and didn’t make it past that. As Jesus once told his disciples, “The spirit indeed is willing, but the flesh is weak” (Mark 14:38).

The truth is I’ve felt convicted about my prayer life for months–almost as long as I’ve been appointed to WorldVenture. I know I should pray more, not just short text-like prayers but the long and focused ones. I know it would be good for me and others. I know God wants it. And yet, I’m still more likely to talk about prayer and even read whole books about it rather than sit down to pray. Somewhere in the back of my mind it still feels like a “task” when it should be a privilege. Isn’t it a privilege to hold a private conference with the Creator of the universe? How do I find it so easy to overlook that?

It’s tempting to overcomplicate things as a means of procrastination. I know I’ve done it. But this isn’t the place to go into detail about how prayer works. Whole books are written on that subject. Instead this is the place to remind ourselves that Jesus tells us to pray and modeled it in his own life.

“In these days he went out to the mountain to pray, and all night he continued in prayer to God” (Luke 6:12).

Yet here I am, writing about prayer while with the media team in Budapest, surrounded by so many reasons to pray. I believe God gave me this gift for writing. It’s how I express myself the most. So I hope that in writing this editorial can be a prayer, even as it is a letter to you and a reflection for my own thoughts. In this too, my work, I am praying. It’s not the dedicated hours of prayer every morning or five calls a day. It’s not those intense immersions with the Spirit that so refresh my spirit. It’s not the communion that I feel called to or the answered intercessions that I seek after. But in some way, may God be in this too.

May he be present and active in all that his children do. For the summer media team, may he be in the articles we write, the photos we capture, and the videos we produce. May he be working through us, more than we ourselves. May he move and speak as we travel, experience foreign cultures, and meet new people. May he renew us, changing us into the likeness of Christ, even as he uses us to transform the world.