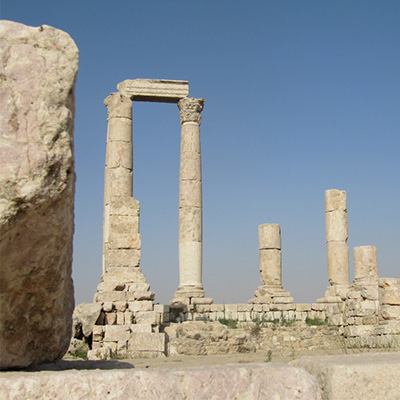 Theological Education in the Cradle of Christianity

Woven into the tapestry of the Arab world is the Qur’an, a book as often misunderstood as it is perused, quoted, and exalted. WorldVenture workers in Arab countries have a complicated relationship with the Islamic holy book, often using it as a bridge to reach their Muslim neighbors.

Sitting across the table from one of these workers at WorldVenture’s 2015 Renewal Conference, I wanted to know how well he knew the Qur’an, so I asked him if he reads it more than the Bible.

“You know, I read the Qur’an more,” he responded. Then with a laugh he said, “That’s a terrible confession to make!”

This worker*, who made the transition from atheism to Christianity in Berkeley, Calif. during his college years, happens to speak and read Arabic fluently. That skill alone makes him more qualified in Qur’anic studies than three-fourths of the Muslim world, all non-Arabic speakers. WorldVenture leaders call him a “well-kept secret.” He’s lived in the Arab world for nearly 40 years, and taught at three theological institutions in the Middle East. Rumors carry that imams seek his knowledge about the Qur’an when they’re stumped.

But he’s quick to dispel this claim.

“They don’t come to me,” he says. “I have acquaintances…that I can visit, and some of them can visit me. They’re not coming to ask about Islam. The point you want to get to with these these [men] is to get their trust, so they will begin asking you—not about Islam, but about Christianity.”

He’s just one of the many theological educators in this region of the world who are using their knowledge of Islam and the Arabic language as a bridge to the 350 million Arab people, 90 percent of whom are Muslims. And in this highly Muslim, highly relational culture, WorldVenture worker Caleb* says a conversation can’t go five minutes without delving into faith or politics. That’s completely contrary to the American idea of polite small talk, but in Arab cultures this kind of dialogue is frequent, and it’s essential.[quote_left]“Islam doesn’t have to be ‘evil’ in order for Jesus to be good news.”[/quote_left]

“Until we start talking about theology and doctrine together, we haven’t really started talking with each other,” said Caleb, who teaches at Arab Baptist Theological Seminary (ABTS) in Lebanon.

The recent rise of radical expressions of Islam through the Islamic State has created an even greater need for reconciliation and dialogue in the Arab world.

However, in a region where Christianity appears to be losing ground, it’s also surprisingly alive. The Jordan Evangelical Theological Seminary (JETS) notes in a recent journal how there are approximately 20 theological schools and programs. The number of these institutions has grown substantially in the last 20 years, when there used to be only one-third of these programs. These theological institutions are laying the foundation for much good in the Middle East, weaving together gospel doctrine and gospel practice.

Elie Haddad remembers the phone call he received from a WorldVenture worker*, asking him to return to his home country of Lebanon as provost of the Arab Baptist Theological Seminary (ABTS). Elie didn’t want to go. He was comfortable serving at his Arabic-speaking church in Canada, and he hated the thought of returning to the country that had forced him to flee. But in July of 2005, he consented to going, as he felt it was from God.

Now president of the institution, Elie has guided ABTS through many changes since its founding in 1960. ABTS recently launched its online program, pioneering quality Arabic theological education. The institution has developed its curriculum and vision to influence interfaith dialogue, missional thinking, and equal training for men and women, all through an innovative curriculum.[quote_right]“The last couple of years, we’re getting a lot more single women from different countries in the Arab world, which is strange and very countercultural. God’s preparing something.”[/quote_right]

While JETS cannot accept any believers from non-Christian backgrounds, as it is located in Jordan, ABTS welcomes them in the more open, Western-friendly Lebanon. ABTS thus educates many North African leaders and other believers from non-Christian backgrounds who cannot find seminary training elsewhere. However, a law in Lebanon does not allow outside religious students to bring their families into the country. This means many wives enroll along with their husbands in order to enter the country as students themselves, resulting in a gender ratio at ABTS of 55 percent male and 45 percent female.

“They go back as a ministry unit, which is very powerful,” said Elie. “The last couple of years, we’re getting a lot more single women from different countries in the Arab world, which is strange and very countercultural. God’s preparing something.”

ABTS has widely influenced Christianity in North Africa, with graduates serving as key leaders in Sudan, Morocco, and Algeria. One Algerian couple, for example, found the husband’s name on an Algerian government list sentencing him to prison. Despite the risks, the couple was so dedicated to serving in the Algerian church that they finished their ABTS education and returned to the country, where a 1,000-member church regularly worships.

“It’s because God had raised people like this couple who are willing to die for their faith,” said Elie. “And now the whole landscape of ministry in Algeria has changed. It’s not underground. It’s very open.”

The only expense for which ABTS students are responsible is their ticket to Lebanon; the school covers tuition, room, and board. But, says Elie, the education comes at a different cost.

“It takes dedicated, committed people, who are willing to not just die for their faith, but live for it in difficult circumstances,” he says.

Classes in the Arab Context

Meanwhile, in the city of Amman, Jordan, a small, unassuming office is home to the Program for Theological Education by Extension (PTEE). The institution, founded in part by WorldVenture missionary Dick Hart in 1981, offers bachelor degrees, diplomas, and certificates in theology. The program currently operates in 15 cities.

PTEE teaches a course on Islam, but it’s not meant to be a Christian apologetics class. Students read Islamic authors and learn about Islam from Muslims themselves. In a similar vein, ABTS teaches each of its classes through an Islamic context, which differs from its previous focus of ministry expectations in solely Christian communities.

Contextualization of the church in Arab culture may mean refraining from teaching systematic theology, as it doesn’t mesh with the circular thinking of Middle Easterners. It may mean understanding that future churches may look like a group of people sitting in a circle on the ground. It’s a necessary direction, as believers from non-Christian backgrounds will most likely make up the future of Middle Eastern churches.

But these institutions reach beyond classroom and theoretical contextualization, aiming for practical application in an area of the world that hasn’t known peace for many years. In the midst of a tumultuous time in Lebanon during 2006, ABTS served as a refugee center for displaced people, Muslims included.

In 2008, ABTS revamped its curriculum to make space for practical application of what students are learning. When the recent Syrian refugee crisis hit, the foundation was already in place for students to move into their communities and offer relief and loving outreach among the refugees.

“Because of the shape of the new curriculum, these ministry opportunities serve as important and creditable learning reflections that we see as highly significant for our students’ learning,” said Caleb.

The same is true for PTEE’s network in Syria to help 60 families following the war outbreak.

Despite the upheaval in Syria, Dick says people are still hungry for the word of God, and PTEE is currently enrolling 15 theological students in Damascus.

Followers of Jesus know reconciliation is foundational to the faith, as Christ’s death reconciles believers to God. But using theology as a means of making peace in the Middle East may look different than what Americans might think.

“The kind of reconciliation we’re looking for is [Muslims] coming to know Jesus,” said Dick. “Because you know it’s a lifelong conversation you’re always looking for ways to open up the topic, to be heard, and to hear what they think.”

The influence of PTEE-trained leaders throughout the Middle East and North Africa demonstrates the breadth and depth of a theological education. The program offers a peacemaking course, and those who’ve studied with PTEE (as well as JETS and ABTS) are now leaders in Sudan, and have directed peacemaking between government officials, teams, and tribes.

“They were theologically trained and knew about ways to help people sit down and listen and work things out,” said Dick. “There are many people who are graduates of ABTS, JETS, and PTEE who are now in important positions in South Sudan. Their basic education was theological.”

One aspect of peace-making involves informing Christians in the Middle East about their own faith. “For every 15 people on the street, one is a Christian. People are talking to Muslims all the time. When they understand their own faith, they can talk about it,” said Dick.

“Each of those projects was an example of attempts at theology serving as a foundation for reconciliation,” said Caleb. “And I’ve seen the same reconciling work happening in our graduates throughout the region.”

ABTS also hosts conferences for interfaith dialogue. One such conference brought together members of Lebanon’s political parties—people who have deep-seated dislike for one another—to hear about the life of Jesus. Another program brings together young people from different faiths, teaching them how to converse.

ABTS brings Muslims, Greek Orthodox, Jewish, and other religious teachers to speak in its classrooms, and a Shia school invites ABTS professors to speak.
Beyond the underlying complexities of reconciliation, ABTS has seen the need to expand the two reactions of either self-preservation or fleeing in the Middle East, according to Caleb. It’s part of why ABTS educators are promoting a third way, the “Jesus way,” some might call it, that of peacefully engaging with others.

It’s unhelpful when Americans and others view Arab Christians as victims or as a persecuted minority, said Elie. Greater possibilities emerge when theology students realize they’re not a “remnant minority.” They are actually a part of a greater majority of silent Christians and Muslims desiring harmony. Because Muslims and Christians have so many commonalities for engagement, Christian theology students become equipped to move into these reconciling spaces.

“When we realize that we can work together with our “other” instead of protecting ourselves from “them,” we find ways to love others and testify faithfully to the good news of reconciliation with God and with each other that is found in Jesus Christ,” said Caleb. “Islam doesn’t have to be ‘evil’ in order for Jesus to be good news.”

WorldVenture missionaries entered Lebanon in 1993. Since then, ministry involvement has expanded from ABTS to medical outreach as well as evangelism and discipleship at a women’s prison there. WorldVenture entered Jordan in 1956, where PTEE has helped disciple and equip Arab leaders in areas of biblical knowledge, counseling, and teaching in the Arab world.