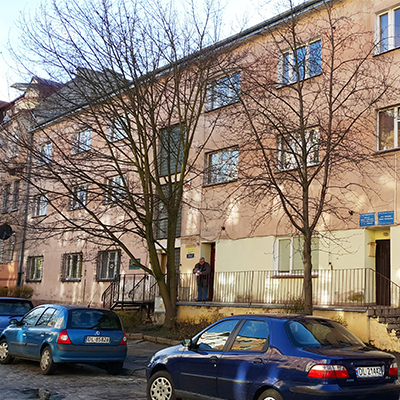 It’s not everyday that the Polish government returns a church from World War II. But that’s just what has happened in the town of Legnica, Poland, according to WorldVenture missionaries Bruce and Linda Thomas.

The church building passed through many hands during the 20th century. The church began as an extension of a German mission station in the Legnica region, which was under German rule at the time. After World War II ended, the government yielded control of the facilities—including a chapel and administrative house—to the Polish Baptist Church congregation. However, just a few months later, the Red Army of the Soviet Union invaded Legnica and occupied the city.

When Poland regained independence in 1989, Polish Baptists renewed their claim to the property, but the process took nearly 20 years. At the end of last year, local authorities finally accepted the Baptists’ claim to their building by giving away another property of equal space and value.

“The process of reclaim has been long and difficult, mainly because of the change of borders after the war,” said Daniel Trusiewicz, a church leader and associate of the Thomases. “However, eventually the fact that the Baptist religion had been practiced in Legnica before World War II has become the major argument, as well as numerous documents, like original church statistics, title deeds, publications, letters, pictures etc. which documented in detail our right to this facility.”

The original church building was destroyed during Poland’s Communist era following World War II, although the city of Legnica still uses the administrative building that survived.

For Bruce and Linda Thomas, this new acquisition means they will have more space to conduct their English camps and other ministries. The three-story building is in an ideal location, and a shared space with a small business, which helps to pay utilities and other expenses. The Thomases and their partners are working to transform the building into nice spaces for meeting rooms and classrooms.

“It’s an ideal situation—basically a free building,” said the Thomases. “All we need now are workers.”

Poland’s return of this Baptist church echoes a similar situation that happened in Albania in the 1990s. WorldVenture missionary Edwin Jakes approached the Albanian government with property papers for a church that had been taken away during its Communist era. After 50 years, the Albanian government agreed to return the church to WorldVenture workers.

The return of the church in Legnica also signals what some might say is a broader trend of evangelical interest in Poland. WorldVenture missionary Randy Hacker explained how evangelical churches in his part of the country are growing quickly for the first time since before World War II. “Four churches from a range of evangelical denominations in our town are bursting at the seams and trying to figure out how to deal with the lack of space,” he said. “In many cases, their current building was purchased or built without much thought of the chance of the church growing as quickly as it has recently.”

The Thomases are also seeing a resurgence of spiritual interest in Poland, although there is still a pervasive tendency toward materialism. “Since so many are disillusioned with the Catholic Church, some are open to alternatives, giving us the opportunity to share something ‘new,'” they said. However, two of the barriers they’re facing are a lack of church facilities, as well as a lack of Polish pastors. “Without solid national leadership, the local church struggles to grow.”

The Thomases are always looking for people interested in helping to teach English, renovating the newly acquired building, or teaching Bible studies. For more information on this, check out WorldVenture’s opportunities in Poland. In addition, we’ve previously written about a Baptist pastor who coaches semi-pro football in Poland.