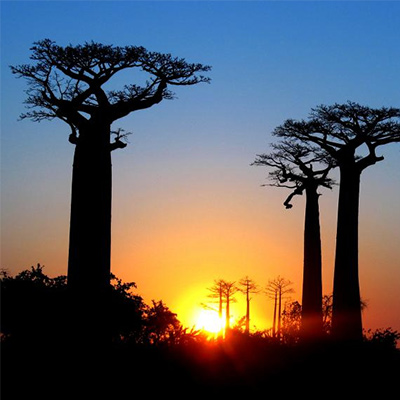 Replanting the Forests of Madagascar

The least compelling thing about Madagascar is that it became the subject of a popular 2005 Dreamworks movie.

Yes, the movie was funny. Unfortunately, it’s the reference point many Americans have for the island at the bottom of the earth. But people know little of its unique flora and fauna. The massive island (the size of Oregon and California combined) boasts some of the strangest species of plants and animals, 90 percent of which are found nowhere else in the world.

As a 10-year-old missionary kid growing up in Madagascar, Jamie Shattenberg rescued 10-foot boa constrictors from villagers’ chicken coops, slinging them around his shoulders and returning them to the forests where they would be safe (something he still does). Jamie has rescued all kinds of animals, from snakes and crocodiles to rehabilitating lemurs: the trademark animal of the island.

And he plants trees. Lots of trees.

What Jamie didn’t realize as a fearless kid growing up on his island playground was that his island was dying. Estimates say Madagascar has lost 90 percent of its original forest, causing innumerable amounts of harm, from loss of animal habitat to soil erosion. But especially, a lack of forest means a lack of resources for the Malagasy people, causing Madagascar to be one of the poorest countries in the world.

“Deforestation is one of the leading causes of poverty because it’s so destructive on multiple layers,” said Jamie. “This is one of the root issues that’s very rarely addressed, and it has long-lasting impact that is extremely negative if the forests are destroyed and not cared for.”

It started long before Jamie or his missionary parents set foot on the red soil of Madagascar. When the French colonized the island in 1896, they cut down thousands and thousands of hectares of forest and planted eucalyptus in the hopes that it would grow quickly for hard wood purposes. What the French didn’t realize: eucalyptus was poisonous to the endemic plants of Madagascar and depleted the water table, thus destroying much of the forests.

This happened on a small portion of the island, however. The two main contributors to deforestation, according to Jamie, have been slash-and burn farming and the use of charcoal. The slash-and-burn farming techniques, where people burn more trees than necessary to clear ground for rice cultivation, have been devastating, not to mention clearing land for cattle grazing. The worst contributor has been the need for charcoal.

“If most of a country relies on charcoal for heating and cooking, it’s in high demand,” said Jamie. “It’s almost like there’s a charcoal mafia. It’s big business.”

Part of the solution

The process of reforestation in Madagascar is similar to many parts of the world. What’s different are the unique trees found there, like the baobab tree. Often called the “upside-down tree” because of its gigantic trunk, the baobab tree produces a super fruit with nutrients that are off the charts compared to other fruits. Certain types of these trees are almost extinct, yet Jamie and his team have successfully grown seedlings and replanted 1000 baobab trees. 40 of those seedlings are of the most endangered baobab species (digitata madagascariensis boenisis).

Jamie spends most of his time empowering the Malagasys to hold leadership roles at the project’s 100-plus sites, mostly on the northwestern section of the island. What’s unique about Eden Projects in their approach to reforestation is the ability to hire more than 300 full-time local employees to plant trees and collect seeds. Seed collection offers a way for the people to have a different income, besides what they would get through selling charcoal or precious timbers. This model allows the Shattenbergs to assimilate the local communities into their projects.

In addition, hundreds of children are now going to school because their parents can afford to send them, people’s health and diets have improved, and some locals have even launched entrepreneurial ventures by saving their wages.

A funny thing happens when local people start planting trees, says Jamie. They start caring. They begin to learn about the issues at stake and why the “mother forest” needs to be used, not abused.

Jamie is planting spiritual seeds through Eden as well.

Farida was the daughter of a village leader, a man who actively decried any efforts on Jamie’s part to share the Gospel. Farida had failed to bring a child to term after her first child, even though she consulted with witch doctors and had sacrificed to her ancestors. However, when Farida started planting trees for Eden, she accepted Christ because she felt cared for. The next thing she knew, she asked Jesus for a child and gave birth to two children. Her husband came to Christ as well.

“It’s not a direct tie to planting a tree, but it’s through the tree planting process that she felt the love of Christ,” said Jamie.

There was also the village that was a center of ancestral worship, where Jamie could not carry out any of his reforestation work. The king said the presence of Jesus, which he knew came with Jamie’s crew, interfered with him connecting with the spirits. However, the king changed his mind when his children begged for jobs with the project. Now, the village has a small Bible study and a church possibly starting.

“There’s a lot of resistance, but the light just can’t be stopped,” Jamie said.

The reforestation happening in Madagascar is proving that the employ-to-plant approach works, as it alleviates poverty and returns forests to their previous grandeur, according to Steve.

“Without Jamie, I can’t imagine Eden being functional in Madagascar,” he said. “We first met in 2006 and processed the wild idea of planting mangrove propagules at Mahabana estuary. At the time the idea was just that—an idea. Now, nearly nine years later, we have tens of millions of trees in the ground, hundreds of people being lifted out of extreme poverty, agreements with National Parks and Universities, and a much brighter looking future for the forests and people of Madagascar.”