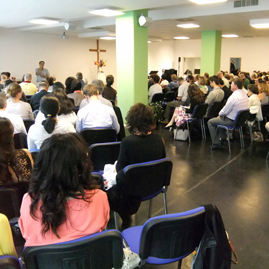 Austria has roughly the same population as New York City. Yet the number of evangelical Christians in the whole country couldn’t fill Yankee Stadium.

Only 0.5 percent of the population is evangelical. Or about 43,000 in a country of 8.6 million people. WorldVenture workers Nate and Bethany Johnson hope to grow the Church by coming alongside Austrian Christians living in Vienna.

“Church planting is still needed in Austria because there are areas of the country and in the city of Vienna with no evangelical witness,” said Nate. “There are many people here in Austria who will go their entire life without a strong and meaningful relationship with a Bible-believing Christian.”

The Danube River slowly meanders through the middle of Vienna, creating a natural barrier between the city center and the developing northeastern quadrant. There, new construction and families moving in has opened an opportunity to plant a church. One neighborhood in the Northeast has about 150,000 residents and only one evangelical church among them. Nate and Bethany are seeking a team of local Austrians and other native German-speakers to start a new church in this neighborhood.

“What we want to do is break down as many of those barriers as we possibly can to reach as many Austrians as we can,” said Nate.

Isn’t Austria a Catholic Country?
More than 73 percent of Austrians identify as Roman Catholic. Yet the Catholic Church’s memberships are declining, and less than 10 percent of those registered attend mass with any frequency.

“For most Austrians, to be Catholic means carrying on a tradition in their families,” said Bethany. “Many of them keep the Catholic Church membership so that they can have a Catholic wedding and a Catholic burial.”

Over 350 years have passed since the Counter-Reformation in Austria, which established Catholicism as the primary religion. Now Christianity continues to bear an adverse association with institutional religion and towering cathedrals. While many Austrians are drawn to spirituality, they often turn to New Age or Eastern philosophies instead. Alexander Gewessler, an Austrian Christian, has noticed these sentiments when he has shared the gospel with other Austrians.

“When I talk about my faith, I never mention a church, because they automatically think of the building, the bell tower, but not about what is actually behind it…a life truly changed by Christ,” said Alexander. “They don’t think about that, of course, because they cannot think about something that they do not know.”

Reinhold Eichinger, a founding member of the Federation of Evangelical Churches in Austria, describes the average Austrian as steeped in a secular, materialistic culture that provides for their external needs. He believes the best opportunities to reach Austrians are through life crises and strong relationships. Often, Austrians do not receive the gospel until after they have left the Catholic Church.

“We hear time and time again of people coming out of the [Catholic] Church, hearing the gospel message explained to them, reading the book of John for the first time, and saying, ‘This is completely new to me,’” said Bethany.

Most of the evangelical churches were first started by American, Swiss, or German missionaries and still depend on their help, so that the church leaders are not Austrian themselves. Only a few churches can afford full-time pastors. The average church may have 50-60 adults and children. A large church has 100 members. Reinhold estimates that 35% of Vienna’s political districts still have no evangelical church presence. Each district represents about 65,000 people without a church.

“Most Austrians who are pastors are either paid partially by the church and then working other jobs or they are bi-vocational, which means they are attempting to juggle pastoring a church with a full-time job,” said Bethany.
Since being a pastor is not a sustainable vocation, Austrian Christians are reluctant to study theology at the evangelical university in Vienna. There are not enough job opportunities to make the investment worthwhile.

“Most of [Austrian Christians] pursue a career in something where they know they will be able to support a family,” said Bethany.

Another difficulty is lacking enthusiasm for outreach. Because of a family-like closeness, many Austrian churches settle at a comfortable mass capacity and struggle to push beyond. It is challenging for new members to enter an established church or else to “divorce” a church family into new plants.

“As Christians in Austria, we don’t expect too much,” said Alexander. “We have to grow in that. We have to believe that God can do everything.”

What Can Missionaries Offer?
In the neighborhood Nate and Bethany plan to serve, they will have an opportunity to reach young families and others who uprooted themselves to join a developing part of Vienna. But the question remains why foreign missionaries are needed at all if there are local Christians.

Two main resources Nate and Bethany see missionaries bringing to the Austrian church are time and theological education. Having full financial support, missionaries can devote themselves to full-time ministry. Local Austrians often have to juggle a full-time job alongside ministry. For the same reason, few believers pursue education in theology and biblical studies. Missionaries with theological backgrounds provide new churches with a firm foundation in the Bible and Christian faith.

“A lot of the evangelical churches here are small and really in need of people to come who have theological training, who have experience in discipleship and outreach, who can help those churches go deeper in their faith, and then also equip the Austrians to reach their own friends and neighbors for Christ,” said Bethany. “As missionaries, we’re limited in how many people we can reach. But if we equip national believers, then our impact grows exponentially.”

The end goal is to develop Austrian leadership to the point that missionaries are no longer needed. In the meantime, Alexander sees missionaries as the most helpful when they are active members of local churches. Some reasons for this are cultural differences missionaries introduce, especially Americans.

“I think they can motivate us, they can be encouraging, and that’s what we need,” said Alexander.

In his experience, American missionaries inspire Austrians with a fresh excitement and pioneering spirit to pursue outreach and growth.

“Austrians tend to be risk-averse and a little bit wary of new things, so asking them to step out from their current church, possibly relocate and start something new, is a big ask. We are praying that God moves in the hearts of some Austrian believers to take a step of faith and join us and focus on this new church plant,” said Bethany.

“It’s not what people would consider a traditional mission field,” said Nate, “but it’s a place with a lot of needs and a place where you can be effective if you’re willing to have that long-term focus.”

As Nate and Bethany prepared for ministry in Austria, people often commented that they could not take the same step of faith. But Nate doesn’t believe that is true.

“We’re here because we took a small step and then another small step and God confirmed himself in each one of those steps,” said Nate. “In that, he steadily and slowly reveals himself to get us to the point where all of a sudden we find ourselves on a plane landing in Austria, getting ready to plant a church.”