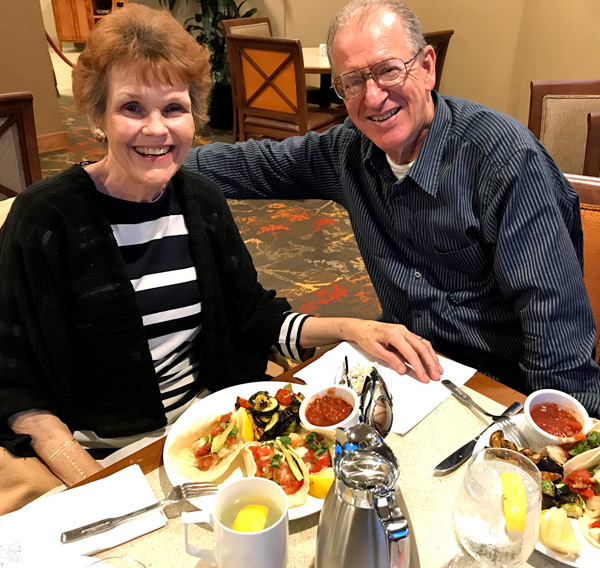 Dana Stucky: A Life of Passion and Impact to the End

Financial contributions may be made in Dana’s honor to the Institute of Albanian and Protestant Studies. Please visit www.worldventure.com/dana and select designation: “Dana Stucky Memorial Fund” to make your gift.

“God commands us to ‘rejoice with those who rejoice and mourn with those who mourn,’” WorldVenture President, Jeff Denlinger, said. “Dana’s life and commitment to God and to others lead us to great rejoicing, even as we mourn deeply with her family. But our mourning is immersed in the hope of the good news that Dana lived out with passion and impact.”

And truly, Dana Stucky lived a life of passion and impact to the end.

Dana was appointed with WorldVenture in 1982 with her husband, Larry Stucky. Trained as a nurse, Dana served in Sao Luis, Brazil and assisted with local efforts to reach people with a message of hope. Along with Larry, she helped establish a church in Cohatrac, and taught at the Sao Luis Theological Seminary. Many people in Sao Luis and other parts of Brazil were deeply impacted by Dana’s model of faith in action.

In 1993, Dana and Larry transitioned to Albania to help restart work begun decades earlier. Although there was no formal language school in Albania, Dana learned the language by building relationships with curious Albanian neighbors. In addition to fruitful work in surrounding towns and villages, Dana and Larry collaborated with others in the formation of educational initiatives for the people of Albania. Dana also served as an executive member of the Institute for Albanian and Protestant Studies. She was instrumental in a project to publish Sevasti Kyrias’ Albanian memoirs, My Life, in both English and Albanian. As in Brazil, what most characterized her impact was an effervescent commitment to live a life that honored Jesus and allowed her to pour herself into others.

Dana and Larry relocated back to the USA for personal reasons and in time, Larry assumed leadership for WorldVenture’s Diaspora Initiatives. Though now living in the US, Dana never lost her passion for cross-cultural relationships that showcased the Lord of all tribes, tongues, kindreds and people groups, including the Albanian people around the world. This led Dana to become one of the founding participants of the North American Albanian Diaspora Forum, and she remained in executive leadership with the Institute for Albanian and Protestant Studies. Nothing would stop her, not even the illness that finally took her life.

To Dana, sharing Jesus was never a job or an occupation. She was not a “professional” Christian; she was an evangelist. WorldVenture was not an employer; it provided a context for global partnership allowing her to follow her passions for Jesus and the lost. To her it was never about projects, it was about relationships. “She was never going to stop doing what she had been doing for so many years of active ministry,” noted Jim Thorp, WorldVenture’s International Ministries Director for the Americas. “She was able to do what she loved until the very end… she went directly from that ministry to the presence of Jesus.” Her life, passion and death serve as an example and calling to a generation of brave new workers ready to enter the most risky parts of the harvest.

Dana is survived by her husband of 41 years, Larry; children Nathan (married to Sarah) and Lydia (married to Tim); and six grandchildren.

A public “Celebration of Life” will be held in the USA at The Well Community Church (Fig Garden Campus), 4545 N Palm Ave, Fresno, CA 93704 on Saturday, November 3, 2018 at 10:00 AM (Pacific Time, UTC -8). The celebration will be live-streamed so family and friends from around the world may participate. More information about this event will be provided in the coming days.

In lieu of flowers or other gifts, financial contributions may be made in Dana’s honor to the Institute of Albanian and Protestant Studies. Please visit www.worldventure.com/dana and select designation: “Dana Stucky Memorial Fund” to make your gift.