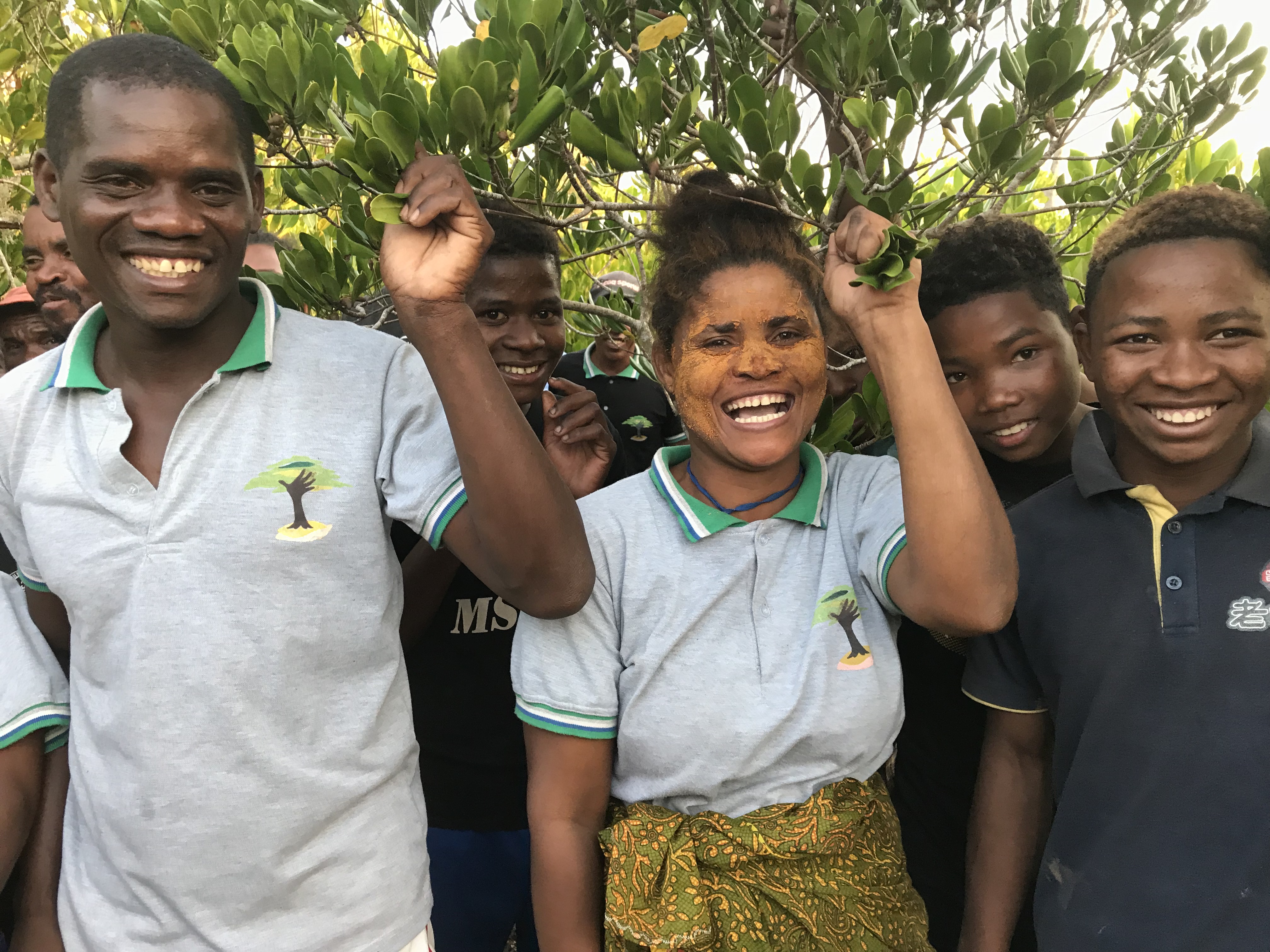 An Interview with Jamie Shattenberg of Eden Projects

Deforestation is a constant threat to the environment and the people living in it. The world loses about 8.3 million hectares per year of forest, often spurred by increasing poverty in developing countries like Madagascar. In 2015, we shared how Eden Projects doesn’t just replant the forests, but also helps Malagasy families combat poverty. Today, stories of hope continue and the forest is growing!

Eden Reforestation Projects is an organization that started in Ethiopia in 2004. Dr. Stephen Fitch understood the “third world culture” and the cycle of poverty. “Many of the villagers, who had been raised over many generations in these areas, were now being threatened with relocation to refugee camps following radical deforestation. Eden Projects was launched in order to attempt to reverse environmental devastation that negatively impacted families and local culture.”

Madagascar is the largest of the reforestation projects in Eden, but the people see the forest as a resource to use, not as one to protect. In Madagascar, charcoal is more desirable than firewood and more available than gas.

“Holding an ax, Mr. Tsitomore… took me for a short walk into the forest to a spot where he had chopped off the branches of a large tamarind tree — a hardwood that is considered sacred in many communities in Madagascar, and cannot be legally used for charcoal.” Hardwoods make the best charcoal but at a devastating cost.

Mr. Tsitomore said in the article, “Within five years, all the trees will be gone.” Eden Projects is changing the land and the people through the help of our missionaries, Jamie and Alissa Shattenberg.

The Death and Life of a Forest

As I talked to Jamie Shattenberg, International Director for Madagascar through Eden Projects, he shared a snapshot of his day and week. It was mid-morning in Arizona, but already ten hours ahead in Madagascar. “There was a fire this morning that came through our property…so I had to get the police. And an outrigger canoe with all our gear for tree supplies…hit a sandbar last week, boat was in pieces, but we saved the gear. 600 hectares of one reforestation zone was burned…crazy life!”

Madagascar is larger than the state of California and is sandwiched between the Mozambique Channel and the Indian Ocean. Jamie grew up on the island—a 21-hour and five-minute flight from WorldVenture Headquarters near Denver, Colorado. He is familiar with the people of Madagascar. Over the years, he watched as the forest changed.

“The biodiversity is tremendous. One of the leading causes of the loss of biodiversity is the fragmented forests so the lemurs are isolated, plants are isolated, then you lose the ability for families of lemurs to migrate. Your gene pool starts to get smaller. This is one factor that leads to extinction.” Jamie explains. Lemurs are found only on Madagascar and “…some tiny neighboring islands. Because of its geographic isolation, Madagascar is home to many amazing animals found nowhere else on Earth. (National Geographic)”

Forest guards are a necessity for protecting the replanting sites and the forests being given to them by the government. Eden Projects is working at connecting the various remnant forests.

“We’re trying to connect them, but every year those fires come through. The fires rip through the grasslands, but as the forests continue to grow, more moisture is retained, making it easier to stop the fires,” states Shattenberg. Eden Projects is planting approximately one million dry deciduous trees each year. In addition, three to four million mangrove trees are being planted monthly. To date, over 235 million trees have been planted in Madagascar through Eden Projects.

In 2015, Eden Projects had over 100-plus polygon sites. Four years later, Jamie tells us with great joy that Madagascar has over 21 planting zones. Each planting zone contains multiple sites inside each zone. They had 300 employees in our previous report. Now, Jamie says Eden Projects employs about 1,000.

“We work with Muslims, traditional Animists, Christians from various churches and denominations, Catholics, protestants…all working together. It opens up the opportunity to rub shoulders with people from all walks of life. What’s really exciting is to see the Malagasy key leaders being the missionaries and sharing the Gospel with their own people.”

Not too many conservation projects benefit the local people where the land is located. Eden Projects understands that sustainable forest care must include combating poverty by providing jobs and education to the Malagasy community while teaching creation care. As missionaries, Jamie and Alissa invest in the people around them.

Farida was the first of the Sakalava people group to commit her life to Christ in Mahabana. Her father did not approve. Jamie went fishing with Farida’s father on numerous occasions. He often brought gifts. “In the Malagasy culture, what you see is not always what’s happening behind the scenes, especially in the spiritual world. We heard stories of how they [including her father] were countering the Gospel.” Farida’s father eventually passed away.

Farida was unable to bring another child to term, even though she consulted with witch doctors and had sought blessing from her ancestors. However, when Farida started planting trees for Eden, she accepted Christ because she felt cared for. After she asked Jesus for a child, she gave birth to two more children—Derek and Marinet. Her husband came to Christ as well. Derek and Marinet are grandchildren of the man who strongly countered the Gospel. Sandy, Farida’s oldest girl, along with Derek and Marinet often have sleepovers with the Shattenberg’s children now. They are close friends.

The Malagasy People: The Heart, The Face, and The Voice of The Project

People’s perspectives about the forest are changing. The mangrove forest is returning. “It’s God’s story that is amazing. It’s an amazing story of restoration, not only in habitat but also in communities; personal identity restoration…We’re looking to empower the Malagasy people to plant, protect, and lead.” Jamie shares.

In caring for creation, God is using Jamie through Eden Projects to holistically change lives. The Malagasy people are taking the project and have “malagasified” it (or made it their own). Eden Projects allow the Malagasy’s to benefit financially from the reforestation work through employment.

Out of the countless stories of success among the Malagasy people with Eden Projects, Jamie shares about Mr. Frederick.

Mr. Frederick came to Eden as a planter, hired for part-time work during planting season. Jamie and the Malagasy leadership staff all thought he had leadership potential. However, his reputation was that of a local drunk.

“Part of why he [Mr. Frederick] drank was because he couldn’t provide for his family.”

“When people are entrapped in poverty at deep levels and entangled in the web of poverty, it’s like they are chained up…they’re trapped…most of the people we work with, they just want to feed their kids, they just want to see life better for their children. As people receive income, Mr. Frederick is an example, they stand taller. You can see their bondage to poverty alleviated. And it’s not from a gift! It’s because they have a job.”

Mr. Frederick struggled to purchase necessities for his family. His kids would ask for a backpack for school. Mr. Frederick would have to say, “I’m sorry, I can’t.” It would rend his heart to see the disappointment in the faces of his children. Eden Projects provided income so he could buy backpacks and other needs for his family; like solar panels for his house so he could enjoy the benefits of electricity and his kids could study at night. Imagine not having a bed for your kids? The income from his hard work helped him earn enough money to buy a bed. It is about empowering the Malagasy out of poverty.

Mr. Frederick worked his way up in the company to become leader of the project in Antsanitia. Jamie learned he did have a higher education. His work experience included accounting. This surprised Jamie. Only ten or twenty percent of Malagasy employees have a high school degree.

Mr. Frederick said, “If I am going to be a leader, I need to live my life in a way that’s worthy to be followed.”

Today, he is no longer an alcoholic. Mr. Frederick is one of the top eight leaders in Eden Projects in Madagascar. Jamie shares how Mr. Frederick brings wisdom and humility to Eden and is valued as an employee. Mr. Frederick describes his work ethic as, “I love my project like I love my wife; I have to care for her every day.”

Mr. Frederick continues to exhibit leadership qualities with Eden Projects and is more active in making his country a better place. He is often one of the faces of Eden Project at government meetings they are called to attend.

“For people in poverty, dreaming is not part of their vocabulary,” Jamie explains. Once a person has a steady income and can provide for their family, the person can dream again. As Eden Projects continue to restore the forests in Madagascar and employ the local people, divorce rates are lower now, more children are attending school, people are buying land and building a house for themselves and future generations.

Mr. Frederick stated, “Now that I have a steady income, I can plan for the future.” Eden Projects encourages a second source of income. The Malagasy learn how to invest to create even third and fourth sources of income! This creates jobs for other people in the community.

“We are fighting a battle right now. Right now, the battle is for lumber and charcoal. As long as 90-something percent of the country needs charcoal every day to cook and to eat, we’ll always be in that battle.” Jamie explains. Eden Projects has increased the space they use for planting. This means that people can no longer go to the same areas for charcoal and lumber. Protecting these areas are vital so Madagascar has a seed source for the future.

Jamie would love to see solutions to the charcoal burning. “We distributed some solar cooking stoves to some villages, but where does ownership go to? Who will clean it? Who will fix it? It’s not as simple as donating them. A lot of factors have to be in place so it is owned, embraced, and used.” Forests bring natural resources, keep topsoil from washing away, and uphold the water table from shrinking. This eventually impacts rivers and oceans.

“God created the garden of Eden for man to live in and God knew that’s where life came from. It’s a natural process of filtration…you wipe out that forest everything begins to change. That’s the reason behind Eden Projects—planting trees and saving lives. Literally, trees will save lives and the future generations are dependent upon how we protect where we plant. The way for me to worship God, our Creator, is to care for His creation,” states Jamie.

For since the creation of the world God’s invisible qualities—his eternal power and divine nature—have been clearly seen, being understood from what has been made, so that people are without excuse. Romans 1:20 NIV