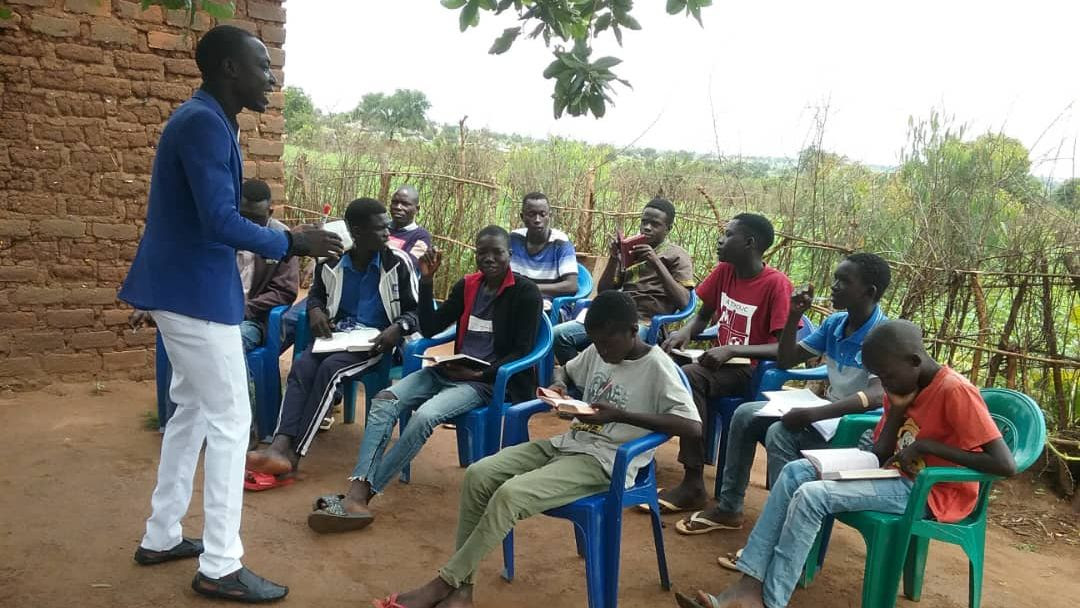 The Courage of a South Sudanese Refugee

And how can anyone preach unless they are sent? As it is written: “How beautiful are the feet of those who bring good news!” – Romans 10:15

Dominic Living Wawa, a Fall 2019 graduate from the Western Uganda Baptist Theological College (WUBTC), works with others to spark a discipleship movement in the Bidibidi Refugee Settlement in Uganda. Dominic is a South Sudanese refugee waiting out civil war to return home to share the Gospel with his people. He shares his story with us.

“I was born in a village called Lapajo, Morobo Country, Central Equatoria State, South Sudan. My mother became ‘mad’ when I was three months old; then I was taken to my grandmother, who now took care of me, till I was 14 years old. When I saw how I was handled by my uncles was not good at all, because most of the time I go to bed without food, no clothes to wear, over-loaded with a lot of domestic works and other, I decided to run away from home to the streets.”

For the next year and a half, Dominic was homeless in Yei River County. Pastor Henry Sebit of Christ-Co Fellowship of Churches met Dominic and “adopted” him for the next eight years, rescuing him from street life. Dominic discovered a passion for helping the unfortunate and sharing the Gospel.

“It was my dream,” Dominic said, “that when I was financially able to, I would go back and make my community/nation a better place.” The pastor and his wife helped to nurture this dream. Because of that strong foundation, Dominic excelled in his community.

“In 2014, after completion of secondary school, I decided to ask Mr. Henry Sebit how I could repay his gratitude towards me. Mr. Sebit said, ‘Do to others what has been done to you.’ This was a perfect confirmation of what the Lord had placed for so long within my heart to see that young men and women are saved, discipled and follow Christ.” Now married to Harriet Faith, they left the refugee settlement in 2018 to join WUBTC. Both desired to learn the Bible. Dominic met Mark Slone in 2018 and 2019 when Mark helped facilitate Dominic’s Pastoral Ministry and Pastoral Counseling classes.

“Mark and the family have been so much good to me in life. In fact, today, I am in Uganda Baptist Seminary through the support that they are giving me both spiritually and financially. And now in Bidibidi, I and Harriet, we have dedicated our life to serve God through preaching the Gospel to the community around us, and now we have established a discipleship class that is bringing youths (together) from different churches within the camp.” Dominic is working hard to re-energize the church in the refugee camps, Africa, and beyond.

Dominic believes the church in Africa is dying, not from a lack of effective evangelism but a lack of discipleship. Typically, a person in Africa will confess faith, and that is where it stops. There is no formal discipleship process. Dominic says, “There is little hope of seeing genuine spiritual transformation in [a believer’s) life.”

Dominic is a very gifted singer and songwriter. With his wife, Harriet, they have a two-year-old daughter. He is one of many stories of God’s grace and the impact that WUTBC is making for His kingdom by its commitment to training Uganda’s next-generation leaders.

“When these Next Generation Leaders graduate from the College, they [will] have a good, solid, Biblical foundation on which to build their lives and ministries in the local churches, helping them move forward in fulfilling the Great Commission. I’m looking forward to joining the staff and investing my life to deepen the students’ preparation further,” Mark says.

Learn more about Mark and Marchelle Slone by clicking here.

Other Articles on Africa: