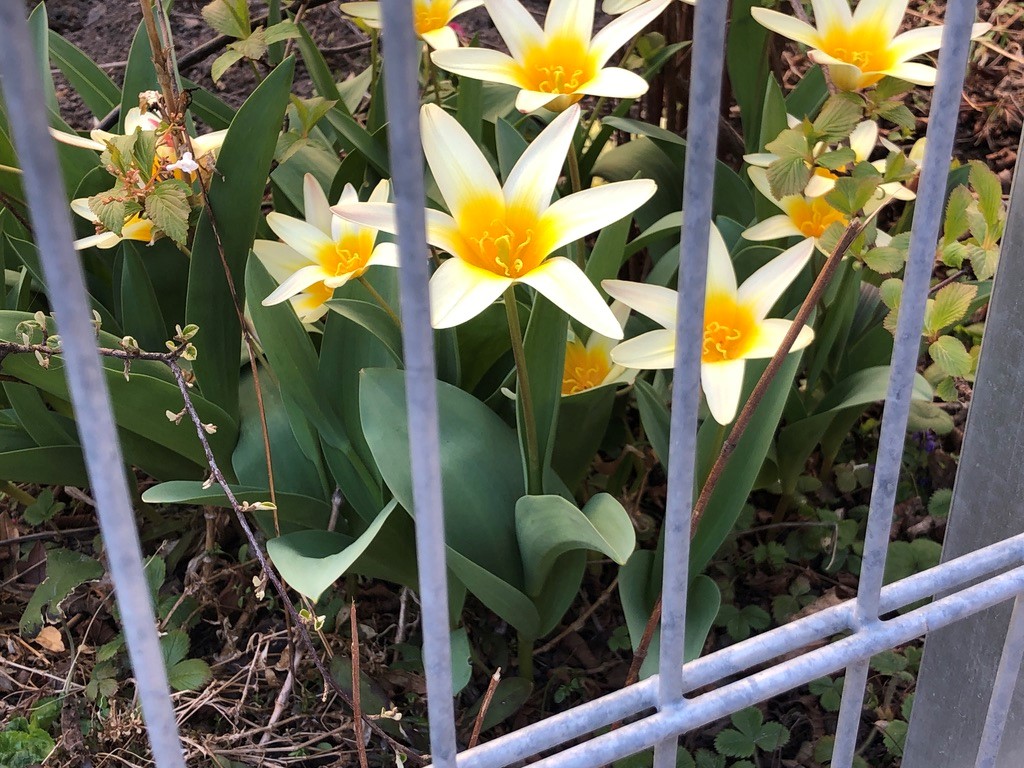 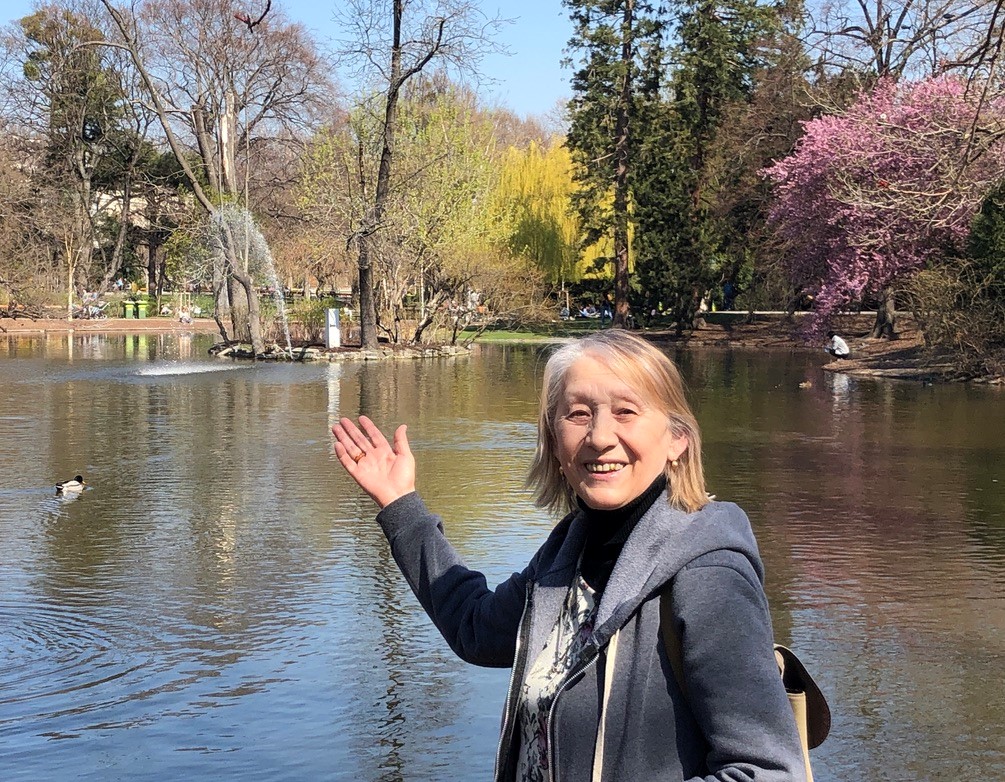 The Journey of Valentina and Chili

“They’re not going to mess with an old lady,” declared Valentina. “I’ve been running for eight years since my evacuation from the east [of Ukraine], and I don’t want to continue to run.”

Like many Ukrainians, Valentina refused to leave her home, even with the threat of an invasion from Russia. Her story, a refugee’s journey through Ukraine and across Europe, is an inspiring tail, I mean, tale of faith and the comfort of a family dog named ‘Chili.’

Eight years ago, Valentina’s refugee journey left her stranded in Luhansk, Ukraine, while her son, Artur, served as a missionary in Asia. His help as Valentina evacuated towards Western Ukraine was limited. He couldn’t find a place for her to stay and arranged for Valentina to join him in Asia instead. A couple of years into this arrangement, Valentina became ill. The Asian government didn’t allow foreigners to be on their state-run health care plan. Consequently, the medical bills rose beyond their means.

In answer to prayer, friends in the region raised more than what was needed in less than 24 hours. The Asian non-believers proudly helped a foreigner out of the generosity of their hearts, but Artur saw it for what it was: an answer to prayer. His mom received medical help, and the publicity from the illness opened all sorts of Gospel opportunities for him. Later, COVID would end their time in Asia. Artur and Valentina returned to Ukraine, where Artur would become Jason Gupta’s assistant in the World Missions program at Kyiv Theological Seminary.

At Home in Ukraine

Meanwhile, Jason and Kerri Gupta, WorldVenture Global Workers in Ukraine, lived in an apartment in downtown Kyiv with their dog, Chili. Since Russia’s first invasion in 2014, the Gupta’s had a contingency plan, including for their dog. But international laws changed in 2021 for traveling pets. As the threat of war from Russia loomed, Jason and Kerri started having conversations about what to do with Chili.

“Ukraine became considered at high risk for rabies, so they placed a ban on bringing pets from there into the European Union or the United States.” Kerri explained. They couldn’t take Chili with them. The uncertainty of their futures and the encroaching evacuation timeline wouldn’t give them the three months needed to gain proper documentation.

Artur suggested his mom could watch Chili in the event that they needed to evacuate. When she evacuated to Asia, she had to leave her cat in Ukraine, and watching Chili had always been such a comfort. “Well, if she evacuates to Western Ukraine, she’ll just take Chili with her. We can arrange that. There’s no problem. Just don’t worry about the dog. We’ll take care of it. It’s fine.” Jason insisted the dog wasn’t worth putting Valentina’s life in danger, but Artur and Valentina persisted. Valentina moved into the Guptas’ downtown apartment, feeling she would be safe enough there, and stayed active in her local church, while looking after Chili.

“Valentina’s church was quite active in ministering to people in Kyiv (helping them get food, caring for people who didn’t have a place to go), especially after the invasion, and they were sharing the Gospel with them, and she loves to do that! I think she said they had 30 converts so far, and they’re waiting for baptisms,” Jason explained.

As the invasion grew worse, Artur insisted his mom evacuate like he did. But Valentina was resolute.

“I’m just waiting for God to tell me that it’s time to go,” she would repeat.

Valentina tried to sleep in the Metro or subway like other Ukrainians to avoid the bombs. The discomfort between the hard cement and the crowds caused her to return to the apartment. She tried sleeping in the bathtub for a while to avoid any possibility of glass from shattered windows, but that didn’t last long, either. Valentina took in a lady and her granddaughter from downstairs. She was sharing the Gospel with them, too. Valentina’s faith kept her strong. As Psalm 28:7a (NIV) says, “The LORD is my strength and my shield; my heart trusts in him, and he helps me…”

Missile strikes in Kyiv began. This made Valentina nervous. The Guptas had left a full pantry before they gave her the keys to the apartment, but the necessities of life weren’t always available to re-stock, including certain items like dog food. Valentina resorted to feeding oatmeal to Chili.

Jason shared, “We ended up finding somebody who was visiting vulnerable people in the city and helping them out. There’s a person you can contact online, and they would take the groceries, medicine, etc. We don’t know if they are believers. That wasn’t advertised, so we vetted them to make sure they were trustworthy. This delivery person encouraged [Valentina], brought her dog food, etc. He came with two other ladies.”

Artur pressured his mom to consider leaving again, but this time with more passion. He said she was risking her own life and that of those helping her with food, medicine, and other practical needs, too.

“She’s always talking about her faith and that God is good. He takes care of his people, his children and things like that so…she was really convinced that she didn’t really need to go anywhere, but for the sake of her son who was getting more and more nervous she finally decided, ‘okay, I’ll go,'” said Kerri.

Valentina prepared to evacuate. And she was insistent about bringing Chili along. After multiple changes of plans, the Guptas stepped in and found someone ready to evacuate her. But she had to be prepared to go in one hour.

Valentina and Chili were taken to a town outside of Kyiv. She joined a crowd of refugees who spent the night in this town waiting for a bus. The bus dropped her off at a train station, and an all-day train ride brought her to a border town near Hungary and Slovakia.

Valentina unexpectedly suffered a brief illness at the border town and had to rest for a couple of days. Meanwhile, with Valentina so close to the border, the Guptas reached out to WorldVenture colleagues to plan the next leg of her journey.

Nathan and Bethany Johnson serve in Vienna, Austria. When WorldVenture leadership contacted them about Valentina, asking if anyone in Austria could meet Valentina at the train station in Bratislava, Slovakia, Nathan and Bethany began talking to other WorldVenture Global Workers in the country. “The Edmunds were able to keep Chili with them for a few days, and the Kosses hosted Valentina. Nate and I were simply the ones that connected everyone and made sure all of the relevant information was communicated. That is a lot of what our team has been doing recently to help refugees – hearing of a need and reaching out to our network to see who can help meet it.” Austria gets 1,000 to 2,000 Ukrainian refugees by train per day, with 300 daily applications for residency in Vienna.

Aaron Edmunds met Valentina and Chili at the train. Valentina didn’t let the language barrier or her weariness get in the way of enthusiastically greeting him. The Edmunds were already taking in another family for a few nights and took Chili home temporarily with them. It would be one of the few times that Valentina and Chili were separated.

Bess Edmunds said, “Chili was immediately a delightful addition to our apartment. Our kids were quick to snuggle with her. Our daughter (4 years old) had gone with me while Aaron was traveling to get dog food and was so excited to choose a special toy to ‘help her feel better while she missed her family.’ Presenting Chili with this new toy was wonderfully giggle-inducing since Chili immediately shoved her nose into it and started to play.”

Brandon and Kristi Kosse embraced Valentina into their daily lives while she stayed with them. Because the Edmunds were close by, Valentina hung out with them, too, like at the dog park with Chili. Bess and Kristi entertained Valentina over Borscht and coffee, even a little sightseeing.

Valentina continued to live out her faith even in Austria. She kept looking forward instead of counting the losses of the past eight years. Her eyes searched the streets of Austria, looking for opportunities to share her faith, to tell of the miracles God has done in her life. Valentina also ministered to a Ukrainian family staying with the Edmunds, too, encouraging them to follow Jesus closely during this time of hardship.

“Like joyful flowers springing up in unexpected places, Valentina sings as she walks down the street, hugs strangers she chats with, and uses her few English words to encourage. Holding us close the night before she traveled, she told us she loved us and thanked us for our care. I couldn’t help but cry as she prayed, in her native tongue, a blessing over our family. No war will stop this beautiful Ukrainian flower from blooming brilliantly! May we learn from Valentina’s example, letting Jesus display His love and joy through us, no matter what battles we face,” Kristi shared.

Valentina eventually reunited with Artur and the Guptas in Spain… along with her canine companion, Chili. While Valentina’s journey continues looking for a permanent housing situation, the Guptas and Valentina’s son, Artur, continue to assist her. At 71-years old, Valentina displayed courage and a positive attitude through war, tragedy, and displacement – something most of us in the United States don’t have to face. And as she journeyed, she shared Christ with anyone who would listen, all the while caring for another family’s dog that became a unique comfort during an otherwise harrowing journey. May we follow Valentina’s example and face unknown futures with the same courage and perseverance, while thanking God for the little comforts along the way. 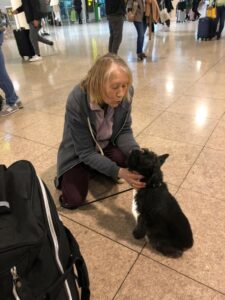